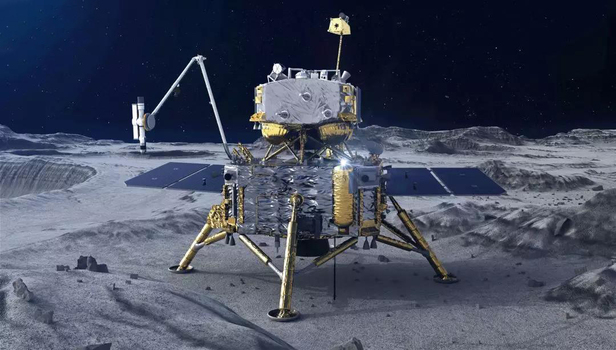 China has successfully launched another spacecraft to the lunar surface.

The robotic moon mission Chang E-5 has made a soft landing close to the designated space on the lunar surface.

It is believed that this spacecraft will collect samples of soil and stones of the lunar surface in the next few days and send them to Earth for examination.

This mission was to be launched in Mons Roomcare, then there is a place near the volcanic hills of the moon.

The camera, radar, a drill and spectrometer fitted to the Chang E-5 lander sent to collect samples.

This lander can collect stones and soil weighing up to two kilos. The samples collected will lead to an orbiting mission that will send it forward to Earth.

44 years before Chang E-5, the Luna 24 mission of the Soviet Union brought 200 grams of soil from the surface of the moon to Earth.

A week ago the launch of the vehicle was covered live by Chinese TV channels but the landing of the mission was not shown on the TV channel.

This news was shown on TV only once the mission successfully landed on the moon. Also, the pictures of the moon's surface taken by the mission at the time of landing were also broadcast on TV.

China has been congratulated by the US Space Agency on the success of China's moon mission.

Senior NASA official Dr. Thomas Zerbuchen has said that he hopes internationally researchers on the moon will also get an opportunity to analyze the samples sent to Earth.

He said, "We hope that after sending samples of soil and stone from the lunar surface to the earth, everyone will benefit from its research." The research of this very important specimen will also benefit the international science community.''

The 8.2-ton Chang E-5 was released from Wenchang station in southern China on 24 November 2020 via a spacecraft.

A few days ago, this mission reached the moon and it placed itself in the orbit of the moon and started circling the moon. Later it was divided into two pieces - the first service vehicle and the return module which stayed in the lunar orbit and the second lander which gradually moved towards the lunar surface.

Prior to the Chang E-5 mission, China had sent two more moon missions, Chang E-3 in 2013 and Chang E-4 Moon mission in 2019. Both of these included a lander as well as a small Moon Rover.

So far, astronauts from the US Apollo spacecraft to the moon during the moon mission and Soviet Russia's robotic Luna program have collected about 400 kg of soil and stones from the lunar surface, but most were missions that involved astronauts.

All these specimens brought from the moon are about three billion years old.

It is believed that the samples brought from Mons Roomcare will be 1.2 to 1.3 billion years old, which means they will be newer than the samples brought earlier. Experts believe that this will give more information about the geological history of the moon.

With the help of these samples, scientists will also be able to accurately prepare the 'chronometer', which is known the age of the planets of the solar system.

It depends on the number of volcanoes present on the surface of a planet or satellite. According to scientists, the planet which has more volcanoes on its surface will be more old, that is, its age will be more. However, it is necessary to see different places.

According to reports from China, the work of collecting samples from the lunar surface will be done for a few days and the samples will be transported to the already existing service vehicle and return module in the lunar orbit.

According to the plan, the return module can land in the Sijiwang Gay meadows in the interior of Mongolia. With this, Chinese astronauts will also return.

He says, "I think what they are doing is a fantastic job." From the first mission of Chang E till now, he has taken one step after another in a planned manner and has enhanced his ability to explore space.''