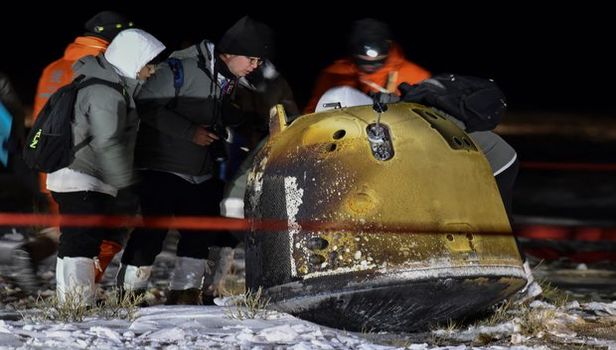 China's Chang E-5 vehicle has returned to Earth by taking samples of stone and soil from the lunar surface.

For the first time after the lunar missions of Apollo of America and Luna of the Soviet Union, a country has brought samples from the lunar surface.

These samples will provide new information about the surface of the Earth's satellite and its past.

Continually increasing its capacity in space, China considers the success of this mission a major achievement.

The Chang E-5 mission has been China's third successful lunar mission in the past seven years.

The astronauts who went to the moon from the American Apollo spacecraft, and the robotic Luna mission of Soviet Russia, collected about 400 kg of soil and stones from the lunar surface.

All these specimens brought from the moon are about three billion years old.

The Chang E-5 was launched by a spacecraft from Wenchang station in southern China on 24 November 2020.

First this mission reached the moon and it placed itself in the orbit of the moon and started orbiting the moon.

Later it was divided into two pieces - the first service vehicle and the return module which stayed in the lunar orbit and the second moon lander which gradually moved towards the lunar surface.

On December 1, 2020, this 8.2-ton orbiter made a soft landing close to the designated space on the lunar surface.

The mission was launched in Mons Rumkere, a place near the volcanic hills of the moon.

A few days after landing, the vehicle sent the first color photographs from the lunar surface.

It took a picture of the moon on the surface, with its feet near the horizon.

A camera, radar, a drill and spectrometer were fitted to the Chang E-5 lander to collect samples of the lunar surface soil and stones.

This lander could collect stones and mud weighing up to two kilos. It took the collected specimens to an orbiting mission that sent it further to Earth.

Prior to the Chang E-5 mission, China sent two more vehicles to the moon.

The Chang E-5 was a complex mission compared to these two.

It is believed that the samples brought from Mons Roomcare will be 1.2 to 1.3 billion years old, which means they will be newer than the samples brought earlier. Experts believe that this will give more information about the geological history of the moon.

With the help of these samples, scientists will also be able to accurately prepare the 'chronometer', which is considered the age of the planets of the solar system.

It depends on the number of volcanoes present on the surface of a planet or satellite.

According to scientists, the planet that has more volcanoes on its surface will be older, that is, it will be older (for this, scientists count the number of volcanic craters). However, it is necessary to see different places.

Scientists had been instrumental in preparing the 'chronometer' from samples sent to the Apollo and Luna missions.

Now the samples sent to the Chang E-5 mission will help them to develop it more accurately.