Is the testing of weapons in space a prior practice of space war? 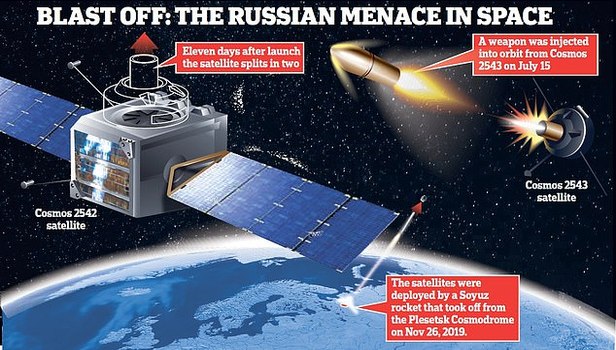 The United States and Britain have accused Russia of testing a weapon-like projectile in space. The US State Department termed it as 'in orbit anti satellite weapon'.

Earlier, Russia's Ministry of Defense had said that Russia is using new technology to test equipment in space. Now Russia has accused the US and Britain of distorting the truth and said that it is not a weapon.

The United States has previously raised questions about Russia's satellite movements in space. However this is the first time Britain has made such allegations.

Christopher Ford, US Assistant Secretary of International Security and Non-Proliferation, said, "Such action is a threat to the peaceful use of space and increases the possibility of generating trash in the space, which is important for satellite and space systems." , On which the world depends, is in great danger. ''

General J. J., head of the US Space Command Raymond said that there is evidence that Russia has tested anti-satellite weapon in space.

He added, "This is another proof of Russia's constant efforts to develop and test space-based systems." And this is in line with Russia's public military doctrine of the use of weapons to put the US and its allies in space at risk. ''

Air Marshal Harvey Smith, head of Britain's Space Directorate, issued a statement saying, "This type of action poses a threat to the peaceful use of space and also poses the risk of debris accumulating in space that is the satellite and the entire space." Can damage the system on which the whole world depends. ''

Only four countries in the world - Russia, USA, China and India - have demonstrated anti-satellite missile technology capability so far.

India demonstrated its capability last year by hitting one of its satellites.

Last year, India killed the Low Earth Orbit (LEO) satellite 300 kilometers away in space. This was a pre-determined goal and was achieved within three minutes.

It was named 'Shakti Mission' and was operated by DRDO. Scientists say that this achievement has given India immunity. If someone destroys the satellite of India, India is also capable of doing so.

India had targeted the satellite at comparatively lower altitudes. This height was 300 kilometers while in 2007 China destroyed one of its satellites at an altitude of more than 800 kilometers. The 300 km altitude is below the International Space Station (ISS).

However, the NASA chief said that 24 pieces of destroyed Indian satellite waste have gone over the ISS.

Jim Brydenstein said, "This has created dangerous waste and it has even gone above the ISS." Such activity will prove unfavorable for future astronauts. ''

Pallava Bagla, a science expert, says, "Countries are becoming dependent on the satellite, the economy of countries has started connecting to the satellite somewhere. If one country wants to do harm to another country, then it can do this work by damaging the satellite, it has been discussed for a long time.

Bagla further explains, "When there are so many satellites and the economy starts to depend on them, what is your approach?" Either you create something that no one can destroy your satellite, or tell the other that if you attack our satellite, then we can also attack your satellite. ''

On the current steps taken by Russia, Bagla says, "America is moving forward, they have a full space command, in addition to the Air Force, Army and Navy, they are also preparing for an army in space." It is natural that Russia will also do something. ''

Bagla believes that this is a competition between countries which has been happening before and will continue.

None of the countries that have the capability to drop the satellite have yet attacked the enemy's satellite. They have been used so far to demonstrate just vigor.

But experts believe that it should not be understood that they will not be used in the future.

According to scientist Gauhar Raza, any technology that can be used will be useful in both peace and war.

According to him, "the role of space is going to be important. Just like his role in the First and Second World Wars after the plane was built. ''

Raza further states, "The role of space in the wars that will take place now will be large only because with the help of it, the other country can be crippled."