Will the Aam Aadmi Party have a mayor even after winning the Municipal Corporation of Delhi? 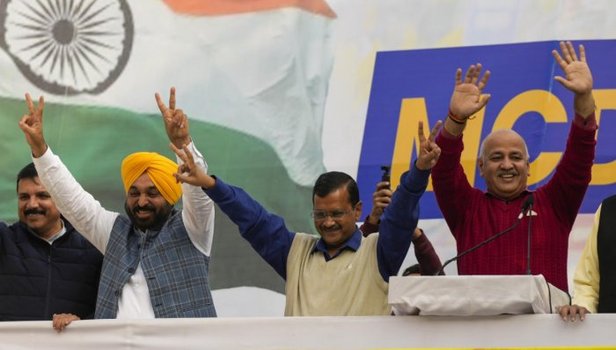 But it is being said that there is not a big difference in the number of councilors of Bharatiya Janata Party and Aam Aadmi Party, so the situation is still not clear about who will be the mayor.

Out of total 250 wards of Municipal Corporation of Delhi, Aam Aadmi Party has won 134. BJP has won in 104 wards and Congress in 9. Independent candidates have won in three wards.

But Bharatiya Janata Party's National Head of Information Technology Department Amit Malviya has tweeted, "Who will be the Mayor in Delhi will depend on the voting of the councillors, how they vote." For example, Chandigarh has a BJP mayor.

In the year 2021, the Aam Aadmi Party won the Chandigarh Municipal Corporation, but the mayor was made of BJP. This happened because of the rebellion of the Congress councilors and the votes of some Aam Aadmi Party councilors being declared invalid.

Delhi BJP chief Adesh Gupta has said, "They may have gone ahead of me in the neck-to-neck fight, but only time will tell who will be the mayor." In the election of mayor, the councilors cast their votes on the basis of their conscience.

Sources in the Aam Aadmi Party have told the English newspaper Telegraph, “We will need at least 150 councilors to neutralize even the defections. Only then can we retain our mayor. But a large number of Muslims switched to the Congress and the division of votes in some areas has benefited the BJP.

We feel that around three councilors of Congress and two independents will go with BJP. All our leaders are in touch with the corporators so that they stay with us. We are aware that some of our potential mayoral candidates may be targeted by the BJP.

If an attempt is made to buy our corporators, then we will also try to bring BJP corporators to our side.

The 2020 Delhi riots affected Muslim-majority areas of North-East Delhi. Apart from this, protests against the Citizenship Amendment Bill were organized in Okhla and Shaheen Bagh.

People have voted for Congress in these areas. The Aam Aadmi Party government was seen as a bystander during the riots. Delhi assembly elections were held in 2020 itself, just after the riots. In the beginning of the year 2022, even when communal tension spread in Jahangirpuri area of Delhi, the Aam Aadmi Party was accused of remaining silent.

The Telegraph wrote that the Aam Aadmi Party blamed Bangladeshis and Rohingyas for the communal violence in Jahangirpuri, but found no concrete evidence. The Aam Aadmi Party has won the Muslim ward of Old Delhi.

After the victory, Aam Aadmi Party national convenor Arvind Kejriwal addressed his supporters and his tone was conciliatory.

Kejriwal was not aggressive at all. Kejriwal said he would work together with the Congress and the BJP for the betterment of Delhi. He said that the central government has an important role in improving Delhi and he expects cooperation. Kejriwal said that he wants the blessings of the central government and Prime Minister Modi so that Delhi can be taken forward together.

The Aam Aadmi Party has promised to remove three mountains of garbage in Delhi. On the other hand, Congress and BJP were seen besieging the Delhi government in the matter of corruption.

But the Central Government had reduced the Municipal Corporation of Delhi to one instead of three, along with it delimitation was also done and instead of 272 wards, 250 wards were made.