Will India-China talks establish peace on the border? 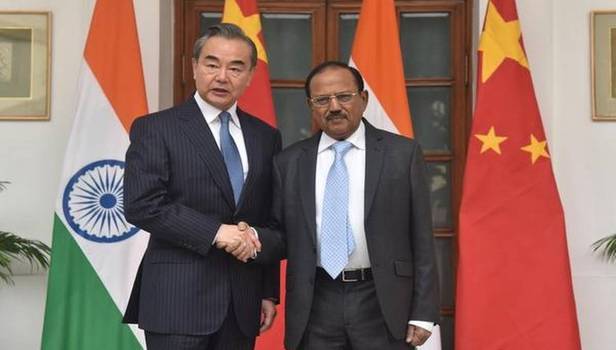 A telephonic conversation between India's National Security Advisor Ajit Doval and China's Foreign Minister Wang Yi took place on Sunday amid efforts to restore peace on both sides following violent clashes in the Galvani Valley between India and China.

The details of the talks between India's National Security Advisor Ajit Doval and Chinese Foreign Minister Wang Yi have been issued by the Chinese Embassy in India.

In his statement, Chinese Ambassador to India Sun Waidong has given details of the interaction between the two Special Representatives. He has said that the Chinese Foreign Minister told Ajit Doval that the relationship between India and China is 70 years old.

According to the Chinese Foreign Minister, what has happened in the Galvan Valley on the western sector border between India and China, it is clear what is right and what has gone wrong.

The Chinese Foreign Minister also said that China wants to protect its sovereignty as well as restore peace in the area.

Wang Yi also stressed in his talk that development is the top priority of both China and India, so both countries should focus on reducing tensions.

According to the Chinese ambassador, there was a detailed discussion between the two representatives. In this conversation, broadly agreed on four things -

- The consensus between the top leaders of the two countries will be implemented. The two leaders have agreed to work together for a long time for peace and development in the border areas.

- The two countries will jointly try to reduce the tension on the border according to mutual agreement.

- Through dialogue between special representatives, both sides will improve mutual dialogue. The system of working mechanism for advising and combining border matters between India and China will be improved by regularizing it. This will strengthen the trust between the two sides.

Earlier, the Indian Foreign Ministry had issued a statement saying that there has been a clear and detailed talk between Doval and Wang Yi about the recent activities on the western sector border between India and China.

It has been agreed on both sides that to strengthen bilateral relations, both countries must restore peace on the border and prevent differences from taking the form of a dispute.

In this direction, both sides have worked on the process of reducing the tension on the border, that is, the situation is not as it was when the soldiers of both sides came face to face. Both sides have agreed to do it step by step in a phased manner.

The statement also said that in this conversation of the two special representatives, it has been agreed to continue the dialogue between the military and diplomatic officials of the two countries.

Apart from this, there has been an agreement to keep regular interactions between Doval and Wang Yi.

At the same time, according to news agency AFP, China's Foreign Ministry spokesman Zhao Lijian told reporters in Beijing on Monday, "There has been positive progress on both sides to reduce the tension on the border."

Lijian has expressed hope that the Indian side will step forward with China to implement the things that have been mutually agreed upon.

Officials watching the India-China border dispute have told the BBC that the process to reduce the border tension has started from Monday morning.

Officials said that this work is going on in three places, these places are Galvan, Gogra and Hot Springs. The official briefing the BBC made it clear that they were not talking about Depsang or Pangong Tso Lake.

Another official said, "Both the tents and temporary structures are being removed and the troops are retreating. But this does not mean the withdrawal or the end of the episode."

Indian officials said that these activities are constantly being monitored, for which the help of satellite images and high platforms is being taken.

In response to the question of how many Chinese soldiers have been withdrawn, several media reports said, the official refused to give any distance.

He said this much, "This is the beginning of the process that was decided after the meeting of the commanders of both sides in Chusul on 30 June".

However, according to reports coming in the media, the Chinese soldiers are going backwards two kilometers from where the violence took place in Galvan.

It is noteworthy that on June 15, there was a violent clash between the soldiers of India and China in the Galvan Valley, in which 20 Indian soldiers were killed.

Subsequently, on July 1, there was a commander-level dialogue between the armies of the two countries and in that negotiation, it was agreed to reduce the tension on the India-China LAC.

Then a week ago, the Government of India announced the closure of 59 mobile apps, including UC Browser of WeChat Ali Baba Group, the well-known social platform TikTok.

Although the Ministry of Information and Broadcasting of India did not take the name of China, it was clear that the complaint was received that these apps on Android and iOS were also interfering with the personal data of the people. Restrictions on these apps will secure India's mobile and Internet users. It is essential for India's security, integrity and sovereignty.