Why did Chandrayaan-2 fail? 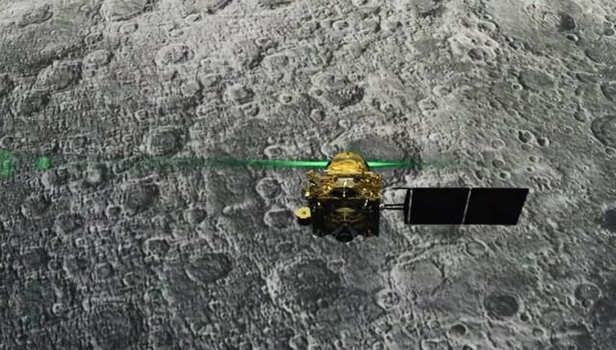 Why did the Chandrayaan-2 of the Indian Space Research Organization (ISRO) fail? What was the main reason for this? It is very important to know this. Why did ISRO fail to make Chandrayaan-2 soft landing on the moon? ISRO says that it has found pictures of Vikram Lander on the lunar surface.

ISRO chief K Sivan said, "ISRO has got a picture of the lander on the lunar surface. The orbiter orbiting the moon has taken the thermal image of Vikram Lander."

The ISRO chief has also stated that cameras in Chandrayaan-2 have confirmed the presence of the Pragyan Rover inside the lander.

After all these things, it is now expected that India's dream, which remained incomplete on Friday night, will be fulfilled.

On Friday night, Vikram Lander was only 2.1 kilometers from the moon's surface when he lost contact with the ground station.

K Sivan has said that ISRO is constantly trying to make contact with Vikram Lander. Although scientists are expecting very little of this.

He says that it would be a wonderful thing if there is contact again.

Scientist Gauhar Raza told the BBC, "This is very difficult. To get back into contact, the lander needs to land properly on the moon's surface, not only that it lands in such a way that its feet are on the surface and that part of it While working, we lost contact. ''

"The other important thing is that the lander is in such a condition that it can generate 50 W power and its solar panel is getting sunlight."

Gauhar Raza is not very hopeful that the lander will be able to contact the orbiter again. According to him, it would be wonderful if there is contact again.

However, how successful ISRO will be in this, it will be known in the coming days.

K Sivan has spoken of taking a 'thermal' image of the lander. The camera that is mounted in the orbiter takes 'thermal' pictures.

As iron is heated, it starts to emit light after a limit, but it keeps the radiation in normal temperature.

This thermal radiation captures cameras mounted in the orbiter and creates a picture and this picture is called thermal image. These pictures are a bit blurred, which has to be explained. These are not the same pictures as we take with a common camera.

A question is also arising whether the lander has crashed or is in good standing.

Scientist Gauhar Raza says, "According to the information received till Sunday, the lander is not completely broken. If the rupture was broken, we would not be able to say that the pictures of the lander were taken."

K Sivan has not stated anything clearly about the damage done to the lander in the hard landing.

Scientists are finding that this means that there was such a decrease in its speed that the lander is not completely ruined by hitting the surface.

Says Gauhar Raza, "It also means that his speed kept decreasing until he landed on the lunar surface."

Only after analyzing the pictures taken by the orbiter will be able to know how much damage the lander has suffered.

In response to this question, Gauhar Raza says that at 2.1 kilometers when our contact was broken by the lander, we did not get the right information till the moon reached the surface from that distance.

"Now that we have got the pictures of the lander, we can now guess what happened in the last moments."

So far scientists are speculating that the speed control of the lander could not be achieved at the last moment. It is a big challenge to land a lander at a fixed speed so that it does not cause any damage and its feet fall on the ground.

For a soft landing the speed of the lander had to be increased from 21 thousand kilometers to 7 kilometers per hour. It is being said that ISRO missed speed control and could not make a soft landing.

There were four rockets around the lander or, say, engines which had to be fired to reduce the speed. When it is coming down from above, then these rockets are fired from bottom to top so that speed control can be done.

Finally the fifth rocket was placed in the middle of the lander, whose task was to bring the lander to zero speed up to 400 meters, so that it could land comfortably, but this could not happen. Trouble started from about two kilometers up.

ISRO chief K Sivan had said in an interview to DD News on Saturday that the Chandrayaan-2 orbiter would be able to work for seven years, though the target is only one year.

After all, in response to the question of how this will happen, scientist Gauhar Raza says that two types of energy are required for the work of the orbiter, lander and rover.

One type of energy is used to run the equipment. This energy is electrical energy. For this, solar panels are installed on the devices so that this energy can be obtained from the rays of the sun.

The second type of energy is used to change the direction of the orbiter, lander and rover. This need cannot be met without fuel.

Our orbiter still has fuel left and will be able to operate for seven years.

The orbiter is working. The discovery of water on the moon was India's main goal and the work is being done by the orbiter. Its data will definitely come in future.

It was a scientific mission and took 11 years to build. Its orbiter was successful and the lander, the rover, were unsuccessful. ISRO will not back down from this failure. ISRO will first try to understand what has happened, then decide on the next step.

The United States, Russia and China have succeeded in soft landing on the moon's surface. India missed it on Friday night. Soft landing means that you can land any satellite safely with a lander and it can do its work smoothly. Chandrayaan-2 was also supposed to land on the lunar surface, but it was not possible in the last moments.