What did the Bangladesh Home Minister say about the violence in Bangladesh during Modi's visit? 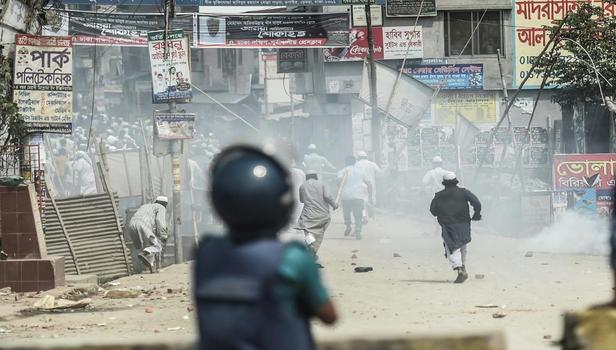 Bangladesh Home Minister Asaduzzamman Khan has expressed displeasure over the violence in the demonstrations against India's Prime Minister Narendra Modi's visit to Bangladesh, saying that "some groups are spreading religious hysteria and destroying government property and the lives of people."

He said on Sunday, March 28, 2021, that violence should be stopped immediately or else the government will have to take strict steps.

There were clashes in Brahmanbaria on Sunday, March 28, 2021 for the third consecutive day against the visit of Prime Minister of India, Narendra Modi.

At least 12 people have died in violent demonstrations so far.

Bangladesh home minister said, "For the last three days, some unruly people and groups have been damaging government property in some areas due to religious frenzy."

Those involved in the demonstrations have allegedly damaged the Upazila Parishad, Thana Bhawan, Government Land Office, Police Outpost, Railway Station, the houses of political personalities and the Press Club.

He said, "We are asking the concerned people to stop this kind of damage and any kind of chaos." Otherwise the government will take strong steps to save people's lives and property.''

The radical Islamic organization 'Hifazat-e-Islam' went on strike on Sunday, 28 March 2021, after several demonstrations against the visit of Prime Minister of India, Narendra Modi.

The strike led to blockades and clashes in many places, but most violence took place in Brahmanbaria.

Bangladesh's home minister said, "Some selfish people are bringing orphaned children to the streets, and harassing them."

He also said that an atmosphere of tension is being created by spreading rumors and fake news on social media.

Bangladesh Home Minister said, "We think it is going against the country." We are asking you to stop it, otherwise we will take action according to the law.''

He said that the government will take steps to ensure that those who are affected by all this do not face any more trouble.

He said that for three days the legal agencies showed great restraint.

The radical Islamic organization 'Hifazat-e-Islam' has denied the allegations leveled against its supporters in the recent violence.

Hifazat-e-Islam said in a statement that the protesters were attacked by the government people and the police.

The joint general secretary of Hifazat-e-Islam, Naseeruddin Munir, told the BBC that it was not right to accuse his supporters of attacking government buildings.

He said, "There was violence on Betul Mukarram on Friday, 26 March 2021. There was anger among many of our madrasa students after the news spread online.''

"One hour after the prayers, the students started a peaceful march," he said. When they got out of the police station, some boys, who were not students of the madrasa, were miscreants who joined the march. They were throwing bricks at the police station. Bullets were fired from the police.''

"Our students did not attack inside the police station," Hafazat-e-Islam joint general secretary Naseeruddin Munir told the BBC. I can give you 100 percent assurance for this.''

The government has acknowledged the demands of Hifazat-e-Islam many times in the past, including making changes to books and removing idols in Bangladesh.