Violence continues in Bangladesh even after Narendra Modi's visit 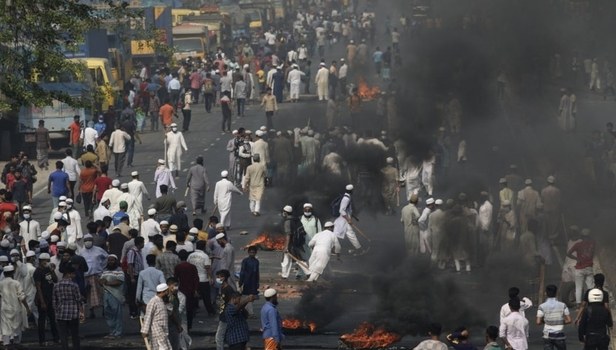 The Brahminbaria of Bangladesh remained turbulent for the third day on Sunday, 28 March 2021, after the visit of Indian Prime Minister Narendra Modi.

Officials at the local hospital in Brahmanbaria said that two more people died on Sunday, March 28, 2021.

At least 12 people have been killed in violent protests in Bangladesh for the past three days.

Dr Shaukat Hussain of Brahmanbaria Sadar Hospital told the BBC that two people injured in the clashes during the strike were brought to the hospital who died.

Doctor Shaukat Hussain did not provide any other information other than this.

Local correspondents say there have been clashes between supporters of the radical Islamic organization 'Hifazat-e-Islam' and security forces.

Many people have been injured in these clashes.

The strike was called by 'Hifazat-e-Islam' on Sunday, 28 March 2021, after several protests against Narendra Modi's visit to Bangladesh.

Local correspondent Masuk Hriday told the BBC that the supporters of the strike attacked various government establishments, vandalized them and set them on fire.

The attackers allegedly set fire to several government and private buildings, including the Land Office, Public Library and the District Crafts Academy.

News agency Reuters reports that hundreds of supporters of 'Hifazat-e-Islam' attacked Hindu temples and a train in eastern Bangladesh on Sunday, 28 March 2021.

Trains to and from Brahmanbaria have been suspended since the incident.

The most violence in Bangladesh has been in Brahmanbaria and Hathazari in Chittagong.

On Saturday, March 27, 2021, at least five protesters were killed in a brawl with police and security forces in Brahmanbaria.

Local journalists reported that the sixth person died on Sunday, March 28, 2021. However, the BBC has not been able to confirm these claims from independent sources.

Prime Minister of India Narendra Modi arrived in Dhaka on Friday, 26 March 2021 to mark the 50th anniversary of Bangladesh's independence. There were some Islamic organizations opposing his visit.