Turkey: Why was the Hagia Sophia Museum converted into a mosque? 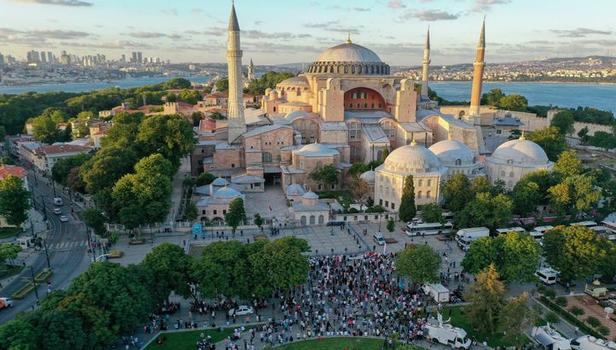 Turkish President Recep Tayyip Erdogan has ordered the historic Hagia Sophia Museum of Istanbul to be converted into a mosque again.

Earlier on Friday, a Turkish court cleared the way to convert the Hagia Sophia Museum into a mosque. The court said in its decision that the Hagia Sophia would no longer be a museum and canceled the 1934 cabinet decision.

This 1500-year-old UNESCO World Heritage was originally a church before the mosque was built and was built as a museum in the 1930s. Turkish President Rechep Tayyip Ardoan promised to make it a mosque again in elections last year.

Hagia Sophia of Turkey has been one of the largest churches in the world. It was built in the sixth century by the dictates of the Byzantine emperor Justinian.

It comes on the UNESCO World Heritage List of UN cultural affairs. This church was converted into a mosque when the Osmania Sultanate occupied the city of Qustuntuniya (later renamed Istanbul) in 1453.

This Greek style church built in Istanbul is considered a unique piece of architecture that has left its mark on the design of large buildings around the world.

After the defeat of Turkey in the first world war and then the abolition of the Osmania Sultanate there came the rule of Mustafa Kamal Pasha. It was under his rule that in 1934 it was decided to make this mosque (originally Hagia Sophia Church) a museum.

In modern times, Turkish Islamist political parties have long sought to build it a mosque, while secular parties have been opposing the construction of the old church as a mosque. There have also been international reactions to the matter, which are divided on religious and secular grounds.

Greece has opposed this decision, saying that this church is the center of faith for millions of people who believe in Orthodox Christianity. Greece's Minister of Cultural Affairs has called it 'the politics of taking political advantage by inciting religious sentiments'.

The UNESCO Deputy Chief said in an interview to a Greek newspaper that the decision of the future of this church should be on a larger scale in which the international fraternity should also be listened to. This representative of the United Nations says that a letter was written to Turkey about this but did not respond.

US Secretary of State Mike Pompeo has said that the change in the condition of this building will not be right as it has been acting as a bridge between different religious beliefs.

This historic domed building is on the western side of the Bosphorus River in Istanbul, Bosphorus is the river that borders Asia and Europe, Asia towards the east of this river and Europe to the west.

Emperor Justinian ordered the construction of a grand church in 532, in those days Istanbul was known as Constantinople or Qustuntunia, the capital of the Byzantine Empire, also known as the Roman Empire of the East.

Construction materials and engineers were employed from far and wide to build this magnificent building.

It is one of the most popular tourist destinations in Turkey.

This church was completed in five years and completed in 537, it became an important center for those who believed in Orthodox Christianity, it also became a symbol of the strength of the Byzantine Empire, important ceremonies like coronation continued in this church.

Hagia Sophia, which means 'holy conscience', has been the headquarters of the Eastern Orthodox Church for nearly 900 years.

But the dispute over it is not only among Muslims and Christians, it was severely devastated by European Christian attackers in the 13th century and made it to the Catholic Church for some time.

Sultan Mehmed ordered that the Hagia Sophia be repaired and converted into a mosque. In this, Sultan himself joined the prayer of the first Jume. The Ottoman Empire is also known as Sultanate-e-Osmania.

Islamic architects broke most of the Ishayat signs or put a layer of plaster over them. Earlier it was just a dome building but six Islamic style minarets were also erected outside it.

The design of many famous buildings in the world, including the famous blue mosque of Turkey built in the 17th century, is said to be the inspiration of Hagia Sophia.

The Ottoman Empire suffered a severe defeat in the First World War, the empire being divided into several pieces by the conquerors. The current Turkey stands on the foundation of the same demolished Ottoman Empire.

Mustafa Kamal Pasha, called the creator of modern Turkey, declared the country secular and in this context changed the Hagia Sophia from mosque to museum.

Since it was opened to the general public in 1935, it has been one of the major tourist destinations in the world.

The Hagia Sophia, because of its history of about one and a half thousand years, is very important not only for Turkey but also for the people outside it, especially for the Christians in Greece and Muslims around the world.

There have been frequent demonstrations in Turkey against the law made in 1934 under which the Hagia Sophia is prohibited from offering Namaz or any other religious event.

Turkish President Recep Tayyip Erdogan has been supportive of these Islamic sentiments and has been calling the Hagia Sophia's decision to make the museum a historic mistake, and has been making consistent efforts to make it a mosque again. As a result, the Hagia Sophia Museum was again converted into a mosque.