Talked to India, Japan and Australia on China's challenge: US 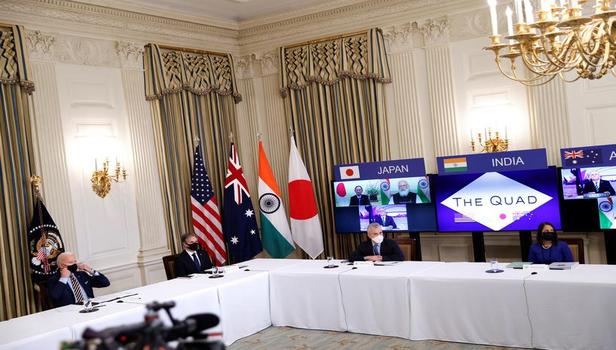 White House National Security Advisor Jake Sullivan stated that 'President Joe Biden discussed the challenges posed by China with leaders of India, Japan and Australia' at the first meeting of the Quad countries.

Jake told the press that this virtual meeting was not focused on China, but it also discussed the East and South China Sea.

In the eyes of the United States, this group named Quod has been created to counter China's growing military and economic power in the Indo-Pacific region. At the same time, increasing mutual cooperation will be the main objective of this group.

It has been reported that in the first meeting held on Friday, March 12, 2021, the leaders of America, Japan, India and Australia talked about working together against COVID-19. At the same time environmental and safety issues were also made part of the dialogue.

After the first meeting, these so-called Quad countries said in a joint statement, "We are trying to create an area that is independent, open, inclusive, healthy, democratic, and which is" forcefully " Do not be impressed.''

The White House has said that the US will fund Indian pharmaceutical manufacturer Biological E Ltd to produce at least one billion doses of the COVID vaccine by the end of 2022, to increase its capacity.

Apart from this, Japan is also talking about giving concessional loans to India, so that India can make and export as many vaccines as possible.

The statement also said that the Quad countries have formed a working group to deal with climate-related issues, so that the Paris Climate Agreement can be vigorously complied with. In due course, the group will also issue a statement about diversification of technology, telecom and equipment suppliers between these countries.