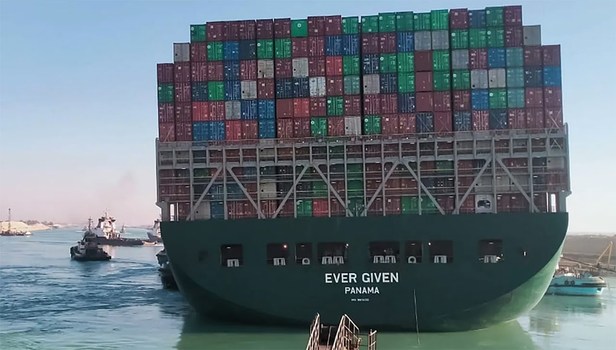 According to the Suez Canal Authority, the direction of the 400 meter long 'Ever Given' ship has been corrected by 80%.

Accordingly, the work of removing the boat will be resumed from Monday.

The 'Ever Given' disrupted one of the world's busiest trade routes, causing the rest of the ship to return and lead to lengthy traffic.

After this success in the rescue of the stranded ship, hope is raised that the jam on the canal may open in a few hours. Nearly $ 9.6 billion worth of goods originates from this waterway every day.

According to the news agency Reuters, tugboats have been used to remove the ship.

According to the Suez Canal Authority, the ship's rear, which was previously four meters from the coast, is now 102 meters. The authority said that efforts have now begun to make the ship in a fully floatable condition.

According to officials, the work of removing the ship will start at 11:30 pm local time after the waves arise.

When the ship is removed, 367 ships waiting there will find their way. Suez Canal Authority (SCA) chairman Osama Rabi told Egypt's Extra News on Sunday, 28 March 2021, that they included a number of cargo ships, oil tankers and ships carrying ANG or LPG gas.

The 400-meter-long Avar Given ship was caught diagonally in the Suez Canal on Tuesday, 23 March 2021 amid strong winds. Because of this, there was a situation of traffic jams on this shortest ship route between Europe and Asia.

After failing for several days to evacuate the ship, on Sunday, March 28, 2021, the Canal Administration began preparations to remove about 20,000 containers from the ship to reduce the weight.