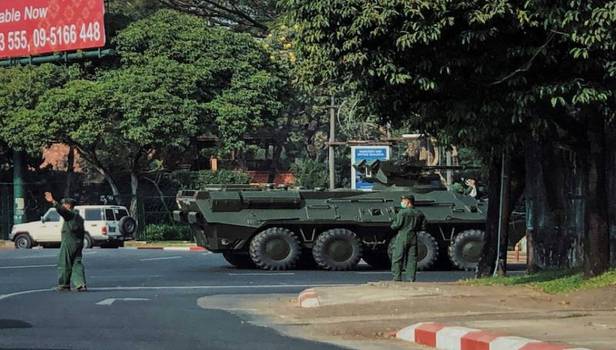 After the arrest of the leaders in Myanmar in the early hours of Monday, 01 February 2021, it was said on the TV channel of the Myanmar army that there would be an emergency in the country for a year.

Soldiers are on the streets in Myanmar's capital, Nepitaw and the main city of Yangon.

There has been tension between the government and the military in Myanmar over the outcome of the November 2020 election. Sui Chi's party National League for Democracy won the election with a huge margin, but the military claims that the election was fraudulent.

The Army had called for the postponement of the Parliament meeting on Monday, 01 February 2021.

India's Foreign Ministry has expressed deep concern over the situation in Myanmar saying that it is monitoring the situation.

Myanmar had a military government until democratic reforms in 2011.

The army said on Monday, 01 February 2021 that it had handed over the power to military chief Min Aung Laing.

BBC South-East Asia correspondent Johnathan Head says the military's move ten years ago is a violation of his constitution. He says that the Army had said last Saturday, 30 January 2021, that it would follow the Constitution.

The military has the right to declare a state of emergency under this constitution, but detaining leaders such as Aung San Suu Kyi can be a dangerous and provocative move, which can be seen in strong opposition.

The BBC Burma Service reported that telephone and Internet services have been cut in the capital.

What happened in the election?

The National League for Democracy Party won 83% of the seats in Myanmar on 8 November 2020. This election was viewed by many as a referendum for the Aung San Suu Kyi government. This was the second election since the end of military rule in 2011.

But the Myanmar military has questioned these election results. A complaint has been made by the Army against the President and the President of the Election Commission in the Supreme Court.

Recently, apprehensions of a coup arose after the army threatened to crack down on alleged corruption. However, the Election Commission denied all these allegations.

Who is Aung San Suu Kyi?

Suu Chi was seen worldwide as a woman fighting for human rights who gave up her freedom to challenge the military rulers of Myanmar.

In November 2015, National League for Democracy Party unilaterally won elections under the leadership of Suu Chi. This was the first election in 25 years in the history of Myanmar in which people participated openly.

Myanmar's constitution prevents him from becoming president because his children are foreign nationals. But 75-year-old Suu Kyi is seen as the supreme leader of Myanmar.

In the year 2017, millions of Rohingya Muslims took refuge in neighboring country Bangladesh to avoid the action of Myanmar army in Rakhine province.

Subsequently, Suu Kyi's international supporters did not condemn the powerful military nor condone the atrocities to prevent rapes, murders and possible massacres.

Some have argued that she is a sensible politician trying to govern a multi-ethnic country whose history is quite complex.

But after Sui Chi presented the clarification during the hearing in the International Court of Justice in 2019, her international fame came to an end.

However, Aung San Suu Kyi holds the title of The Lady in Myanmar and is still popular among the majority Buddhist population. But this majority society has little sympathy for Rohingya society.