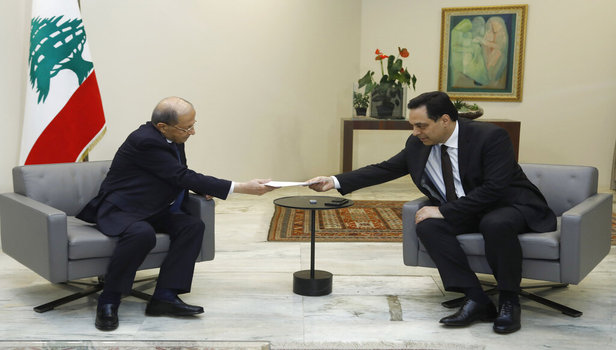 Lebanese Prime Minister Hassan Diab has resigned along with his entire cabinet due to the blast on Tuesday in Beirut.

Prime Minister Hasan Diab announced this in his message to the nation on national television on Monday evening.

However, earlier news reports had reported that he had submitted his resignation to Lebanese President Michael Aoun and an official announcement would be made soon.

Many of his ministers had also resigned before he resigned. However, there was a demand that the whole government should resign.

The Lebanese people were accusing the government of corruption and disqualification.

Angry people were protesting for the third consecutive day and people clashed with the police.

For years, the explosion triggered an explosion of 2750 tonnes of ammonium nitrate unsafely at the port, killing more than 200 people and injuring thousands.

The President has asked the government to continue in office till a new cabinet is formed.

He said that his government had gone ahead and prepared a roadmap to save the country, but this could not happen due to corruption.

Without naming anyone, the Prime Minister said, "Corruption in Lebanon is 'bigger than the nation' and a very strong and thorny wall separates us from change." A wall that has been surrounded all the way through a class which is adopting all dirty methods to protect its interests. ''

He further said that "those people knew that we were a threat to them and if this government was successful, it meant that for a long time there would have been a real change in this class of ruling whose corruption has strangled the country."

He said in his message, "We are following the people's responsibility for the tragedy (which had been hidden for seven years) to determine the accountability of the people responsible and the desire for real change."

Parliament will now have to choose a new prime minister, according to which a BBC correspondent will follow the process of narrow politics which is the root of the problem.

In Lebanon, there is a division of power between people representing various religious groups.

Due to the civil war that took place from 1975 to 1990, many warlords had stepped into politics and they still have considerable influence in the political, economic and social sphere of Lebanon.

Many people protesting on the streets consider this system responsible for corruption in the country.

The death toll in the Lebanese capital Beirut on Tuesday last week has risen to 220, and according to Beirut Governor Marwan Abood, 110 people are still missing. Most of them are foreign workers and truck drivers.

Nearly six thousand people have also been injured in this blast.

The economic crisis in Lebanon is also deepening after this explosion. The explosion is believed to be due to corruption and maladministration in the Lebanese political class, questions are also being asked about the reasons for placing explosives in the main part of the city.

Because of this, thousands of people are protesting on the streets of Beirut. On Monday, too, violent clashes were witnessed between protesters and police for the third consecutive day.

In view of the Lebanese crisis, UN agencies are also providing humanitarian aid, while the international community, led by French President Emuenel Macron, has also decided to provide $ 297 million aid to Lebanon.