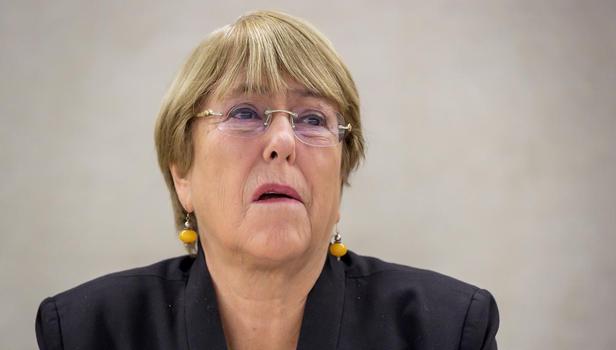 The United Nations Human Rights Commission has expressed concern over the current situation in Jammu and Kashmir.

At the 42nd session of the United Nations Human Rights Council held in Geneva, the Commission's High Commissioner Michelle Beshelet expressed her concerns about the NRC and Jammu and Kashmir and the northeastern state of Assam.

The High Commissioner of the United Nations Human Rights Commission has said that they are concerned about protecting human rights after the removal of Article 370 in Kashmir.

United Nations Human Rights Commission chief Michelle Beshelet said on Monday, "Regarding Kashmir, my office has been receiving frequent reports about the human rights situation on both sides of the Line of Control."

"I am concerned about the recent decisions of the Government of India affecting the human rights of Kashmiris, internet communication, restrictions on peaceful gathering and the detention of local leaders and activists."

She said that I want to urge the governments of India and Pakistan to ensure that human rights are respected and defended.

"I have specifically appealed to India to relax the existing lockdown or curfew. I urge that basic services reach the people as well as to ensure that those who are detained, all human rights will be respected in proper procedures in place.''

"It is important that the people of Kashmir be consulted in the process of all decisions that will affect their future."

Mitchell said, "Given the growing trend of unrest and violence in different parts of the world, the international community including human rights do not want to interfere in their internal affairs, so all parties involved should exercise restraint except violence and give priority to free and inclusive dialogue. ''

Michelle said that she appeals to all concerned countries to sit together and solve these important issues of human rights.

Pakistan's Prime Minister Imran Khan has reacted on Twitter to the statement of Human Rights Commission on Kashmir.

He wrote, "I welcome today's statement of the UNHCHR in Geneva. I appeal to the UN Human Rights Council to constitute a commission of inquiry in the matter of two reports from India-administered Kashmir."

Earlier, Imran Khan had said that India is shying away from talking about the Kashmir issue because of RSS's viewpoint.

He had said, "Because of Narendra Modi's mistake, the people of Kashmir have got a big chance of independence. Because of this step of India, the issue of Kashmir has become an international issue."

Along with Kashmir, Mitchell has also expressed concern over the implementation of NRC in the northeastern state of Assam and the situation thereafter.
Image copyright ohchr.org

On the NRC implementation in Assam, Mitchell said, "The recent National Register of Citizen Verification process in the northeastern state of India has created a lot of uncertainty. Its final list released on 31 August does not have the names of 19 lakh people. I appeal to the government that the process of appealing should be made easier and people should not be taken out of the state."