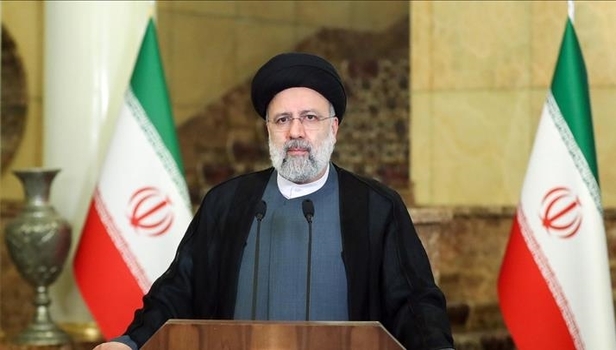 Iran's President Ibrahim Raisi has criticized the normalization of relations between some Arab countries and Israel and has also warned Israel about it.

Ibrahim Raisi spoke of relations between Arab and Israel countries during a military parade in Tehran on Iran's National Army Day.

He warned Israel there, saying, "If Israel wants to normalize relations with some countries, then it knows that its smallest actions are not hidden from us."

"If they make a mistake, we will directly strike the heart of the Jewish regime, and the power of our army will not allow them to sit in peace."

According to Iranian media, the military parade took place after a gap of two years due to the Corona epidemic, which was organized in the presence of senior Iranian leaders and military officials.

New weapons and equipment of the army were also displayed in it. During this, Ibrahim Raisi also praised Iran's Revolutionary Guards.

The enmity between Iran and Israel is well known

Iran does not recognize Israel. Whereas Israel has also said many times that it will not tolerate nuclear-powered Iran. Donald Trump ended the nuclear deal between Iran and the West. But since Joe Biden became president, efforts were on to implement the nuclear deal anew.

In March 2022, these talks were also canceled because Iran wanted the US to remove the Revolutionary Guard Corps from the list of its foreign terrorist organization, but this issue could not be resolved and the talks also stopped.

Iran has repeatedly alleged that Israel has attacked its nuclear bases and killed Iranian nuclear scientists. Israel neither denies nor confirms these allegations.

At the same time, undeclared conflicts at sea between Israel and Iran also come to the fore, in which there are mysterious attacks on ships.

Israel has been expressing its concerns about Iran's nuclear program. Israel suspects that Iran is building nuclear weapons, which Iran has denied.

In recent years, many Gulf countries have come closer to Israel. Just in March 2022, a big conference of four Arab countries was organized in Israel, in which US Secretary of State Antony Blinken also arrived to attend.

The foreign ministers of the United Arab Emirates, Bahrain, Morocco and Egypt participated in the conference. This was the first time that Israel had organized a meeting of senior officials from so many Arab countries.

Such a meeting and close is also being seen as a new regional alliance against Iran in the Middle East. It is also being said that the meeting has also made it clear that now Arab countries are ready to increase relations with Israel without resolving the issue of Palestine dispute.

According to reports in the Israeli media, at the end of the meeting, Israeli Foreign Minister Yair Lapid told that a "regional arrangement" for protection from drone and missile attacks, sea attacks among all the countries participating in the conference. There was a discussion. Yaer Lapid was referring to Iran or its allies.

Actually, all these countries have been raising questions about Iran's activities.

Saudi Arabia, Bahrain and the UAE have also always been suspicious of Iran and its Islamic Revolutionary Guard Corps (IRGC). BBC security correspondent Frank Gardner cited one of the reasons for this in his report, writing, "They are cautious about Iran because Iran has created a network of powerful proxy militia groups in the Middle East in violation of international sanctions."

In such a situation, Iran is openly expressing its hostile relations with Israel, as well as giving a signal to the Arab countries about its stand by targeting Israel.

However, on National Army Day, Ibrahim Raisi said, "Our strategy is not to attack but to defend."

"Iran's military has made good use of the sanctions opportunity to further strengthen itself and our military industry is in the best shape possible," he added.