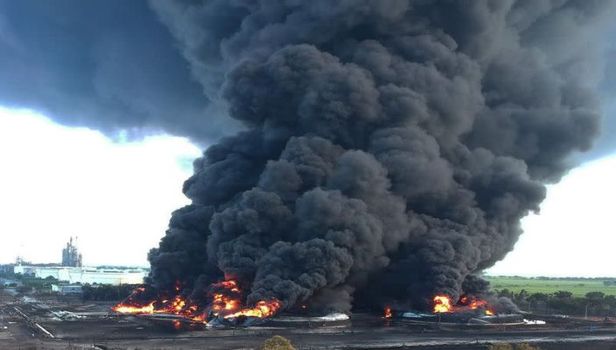 A horrific fire broke out on Monday, March 29, 2021 at the Balonagan Refinery, one of Indonesia's largest oil refineries. Relief and rescue teams have to work hard to control the fire. This refinery in West Java province is owned by the state-run oil company, Pertemina.

According to local time the fire erupted around midnight around 12:45. The cause of the fire has not been known yet.

According to media reports, at least five people were injured in this fire. As a precaution, around 950 people have been evacuated from their homes and sent to safe places. Although some people are said to be missing.

TV footage and video posted on social media has also seen flames and smoke swings rising above the refinery on the morning of Monday, March 29, 2021.

News agency Reuters quoted a local media organization Metro TV as referring to a person. The man said, "We first felt a strong smell of oil like tearing the nose." After that we heard the sound of flames.''

According to the Regional Disaster Management Agency, five people have been hospitalized for treatment after being seriously injured and 15 with minor burns.

BBC News Indonesia correspondent Jeromei Veeravan said, "The Balonagan Refinery is one of Indonesia's largest refineries. Its importance is because it supplies fuel and petrochemicals to the Greater Jakarta region.''

According to him, the question of how much this firefight will affect the factories along with the plastics and chemical business is arising. However, refinery owner Pertemina has told the people that the oil supply system is unaffected and it continues as before.

On the other hand, many people are asking how can such a disastrous event happen in a government refinery?

Kurtubi, a politician and a member of the Energy Affairs Commission of the House of Representatives, said in a TV interview that the Balonagan refinery operating since 1994 is relatively new compared to the other refineries at Partemina. He has demanded that the distance from the residential areas of all the oil refineries of the country be ascertained.

According to Jerome Veeravan, there is a demand for an in-depth investigation into the incident on social media. One person has asked, "Was there a tampering in the refinery or was it an accident?" Others are asking whether the standard operating procedure (SOP) was followed in the refinery. At the same time someone wrote, "The person who has a role in this case should be taken to court."

A BBC correspondent has reported that people living near the refinery, following safety standards during the Corona era, have been evacuated from their homes and sent to different camps as a precautionary measure.

Veeravan quoted Pertemina as saying that the cause of the fire has not been ascertained but the incident occurred during heavy rains and lightning.

No effect on oil supply

At a press conference on Monday, March 29, 2021, the company stated that the fire had not damaged the refinery's processing capabilities, so operations could return to normal within the next five days.

Reuters was quoted by Pertemina CEO Nikki Vidyavati as saying that the fire was on refinery tanks. This has not caused any damage to the processing plant. The company said that it is closing its refinery and the flow of oil is being controlled to prevent this fire from spreading further.

The Balonagan Refinery is 225 kilometers east of Indonesia's capital, Jakarta. Located in 340 hectares, the refinery has a processing capacity of 1,25,000 barrels per day.