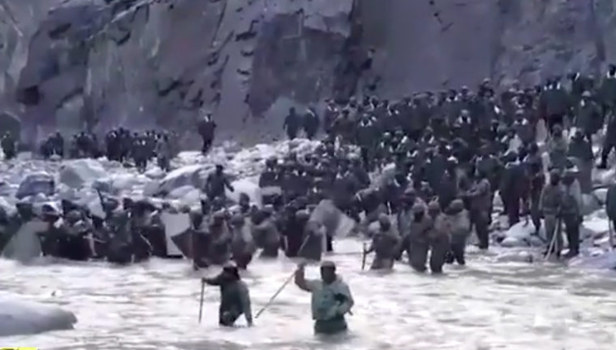 Chinese government media Global Times has released video footage of a clash between the Indian Army and the Chinese Army in the Galvan Valley in June 2020.

The video released by China has the scene of giving salute to these four soldiers. The video also depicts clashes between soldiers from India and China. In the video, military officials from both sides are also seen talking.

In the video released by China, pointing towards India, "Since April, the foreign army concerned was violating the old agreements." They crossed the border to build bridges and roads and carried out reconnaissance expeditions. ''

The video said, "Foreign forces made unilateral efforts to change the status quo, resulting in increased tension on the border." A video released from China shows soldiers from India and China fighting each other in the dark of night. It also shows Chinese soldiers handling an injured Chinese soldier. The released video also shows the Chinese army saluting the slain soldiers.

Earlier, the Global Times reported to the Chinese Army's official newspaper, PLA Daily, that China first gave details of their names and details to pay tribute to the soldiers who had offered sacrifices in defense of their sovereignty.

The PLA Daily wrote in its report on Friday, 19 February 2021, that the Central Military Commission of China has identified and awarded titles to five Chinese officers and soldiers in the Karakoram Mountains.

For the first time in the report, the Chinese Army has given a detailed account of the Galvan conflict and how the Indian Army sent a large number of soldiers there who were hiding and forcing the Chinese army to retreat?

The report also describes how Chinese soldiers protected their country's sovereignty amidst attacks by steel poles, pointed poles and stones?