How will the closure of the Suez Canal affect the world economy? 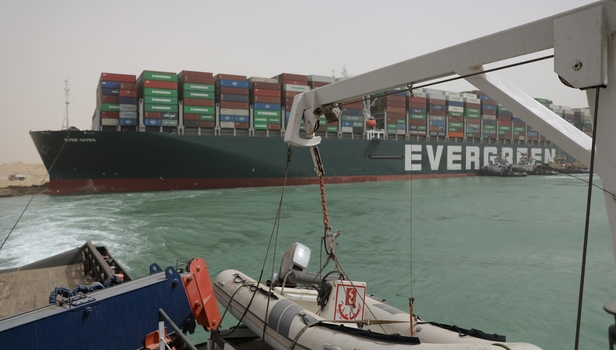 The Suez Canal, known as the backbone of world trade, is one of the main sea crossings in the world. This makes up 12% of the world's total merchandise.

In such a situation, after the cargo ship going from China to the Netherlands got stuck on the morning of Tuesday, 23 March 2021, it is expected to have a serious impact on the business of the world.

This cargo ship has blocked the way for the rest of the ships.

Niels Madsen, vice president of products and operations at Denmark's consultancy firm C-Intelligence, predicts that if this ship is stuck for 48 hours, the already serious condition will slowly deteriorate.

He told the news agency Reuters that if this happens for three to five days, then it will start to have a very bad effect on world trade. The most common is the possibility of inflation rising due to the halt of movement of goods.

Why is the Suez Canal so important?

1) An important link to unite east and west

The Suez Canal is a 193 km long canal located in Egypt that connects the Mediterranean Sea to the Red Sea. It is the shortest sea link between Asia and Europe. This waterway crosses the Svez isthmus (Strait) in Egypt. This canal consists of three natural lakes.

The importance of this canal, active since 1869, is that ships to the eastern and western parts of the world first used to sail on the southern tip of Africa via the Cape of Good Hope. But after the construction of this waterway, ships began to sail through this part of West Asia to Europe and Asia.

According to the World Maritime Transport Council, the ship connecting Asia and Europe has to cover a distance of nine thousand kilometers after the construction of this canal. This is 43 percent of the total distance.

According to consultancy firm Lloyds List, on Wednesday, 24 March 2021, 40 cargo ships and 24 tankers were stranded waiting to cross the canal.

Dry products such as grain, cement are loaded on these vessels. At the same time, petroleum products are filled in tankers.

Eight ships carrying livestock and water tankers are also stranded, according to the news agency Bloomberg.

Given the condition of the Suez Canal and its importance, it is called one of the few 'choke points' of the earth. Therefore, the US Energy Agency considers the Suez Canal to be essential for global energy security and the supply of all types of goods.

According to an estimate, about 19 thousand vessels from the Suez Canal carry 120 million tonnes of cargo every year. The Lloyds List believes that $ 9.5 billion worth of freight ships pass through this canal every day. Of these, about $ 5 billion goes to the west and $ 4.5 billion goes to the east.

Experts say that this channel is very important for the supply of goods in the world. So its blocking can have serious consequences.

He said, "If we assume that all the ships are full. So in terms of 55 thousand TEUs (capacity measuring unit of container), within two days, a total of 110 thousand TEUs of goods going from Asia to Europe will be trapped. And as soon as the jam is over, all these ships will arrive at the European ports simultaneously, so that the load there will also reach the peak. ''

Jensen estimates that within a week we will have to see tremendous pressure on European ports. In his opinion, due to this problem, the supply and price of every goods sold in the shops is feared to be affected.

Salvatore Mercogliano, a marine affairs expert and history professor at Campbell University in North Carolina in the US, believes that the problem could have serious repercussions on world trade.

In a conversation with the BBC, he said, "With the closure of the canal, cargo ships and oil tankers are unable to deliver food, fuel and finished goods to Europe." Due to this, no goods are being sent from Europe to the far east.''

BBC economic correspondent Theo Legatt said, "The Suez Canal is critical to the transportation of petroleum and liquid natural gas, as fuel is transported from the Middle East to Europe."

Lloyds List Intelligence reported that 5,163 tankers had passed through the canal last year. Due to this, about two million barrels of oil were transported every day.

According to the US EIA, the Suez Canal and the Sumed Pipeline (from Alexandria in the Mediterranean Sea to the Suez Bay) carry nine percent of the total oil traded by the sea and eight percent of the liquid natural gas.

Given the importance of the canal and the current problem, on Wednesday, March 24, 2021, oil prices increased by more than six percent. However, it declined on Thursday, 25 March 2021.

ING Bank believes that if this blockage is prolonged, it is more likely that buyers will have to turn to the cash market to secure oil supplies from elsewhere.

The containers must also decide whether to wait for it to be emptied or go through the 'Cape of Good Hope'. According to ING Bank, freight will be delayed if either of the two options are chosen.

In the opinion of experts, the real effect of the existing problem will be revealed only with time.

"The problem will probably be weak and short-lived," Bionar Tonhaugen of the Ristad cabinet told news agency AFP. But if this obstruction continues for a long time, then it will increase inflation. This effect will last for a long time.''

Effect on other goods

"There are millions of dollars worth of goods on other ships," Ian Woods, a London-based lawyer for Clyde & Co's maritime affairs, told NBC. If the canal is not normalized quickly, the ships will go by other routes. This means more time and more cost. And this will ultimately be recovered from the consumers only.''

Leggett, a BBC expert, said it was a nightmare.

He said, "This has shown what can go wrong when new generation big ships like the Ever Given pass through the narrow canal."

However, parts of the canal were widened in 2015 as part of the modernization plan. Yet it is very difficult to navigate. Not only this, more serious accidents are expected in the future.