How was the ship stuck in the Suez Canal finally evacuated? 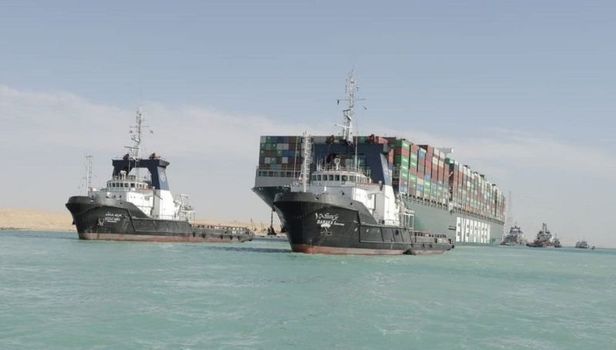 The jam has opened in Egypt's Suez Canal. After a lot of effort, the huge ship stuck there for a week could be removed from the path.

Hundreds of ships are waiting to pass through this canal connecting the Mediterranean Sea to the Red Sea.

It is one of the busiest trade routes in the world.

Peter Berbersky, CEO of Boskalis, the company that helped remove the ship, said, "The Ever Given re-floated on Monday, March 29, 2021 at 15:05 local time. After which it was possible to reopen the route to the Suez Canal.''

Egyptian officials say it will take up to three days for all ships stranded due to the jam, but experts believe the impact on global shipping may take weeks or even months.

How was the ship finally evacuated?

On the morning of Tuesday, March 23, 2021, it was a difficult challenge for the rescue teams to evacuate the two-million-tonne vessel stuck amidst strong winds and sand storm.

The SMIT, an expert team in the evacuation of such vessels, arranged for 13 tug boats. Tug boats are small but powerful boats that can pull large ships from one place to another.

Dredgers were also called. Who dug out 30,000 cubic meters of mud and sand from under the ends of the ship.

When this did not happen, it was also thought that some cargo would have to be unloaded to lighten the ship. It was feared that some 18,000 containers may have to be removed.

But the high waves helped the tug boat and the dredger in their work, and on the morning of Monday, March 29, 2021, the stern (the ship's rear) was evacuated, then the massive ship stuck diagonally could be straightened to a great extent. A few hours later, Bo (the front of the ship) also escaped and the Ever Given was in a floating position, that is, it was completely evacuated.

The ship was then pulled to Great Bitter Lake, which lies between the two halves of the canal on the north side of the shipwreck. Safety check of the ship will be carried out here.

A Marine source told Reuters on Monday, March 29, 2021
In the evening, the ships were heading south towards the Red Sea, while the leath agencies that served the canal said that the ships had started to come out of the Great Bitter Lake.

Some ships have already left the area. They decided to take an alternative, longer route around the southern tip of Africa.

These cargoes will definitely take more time to reach. When they arrive at the port, they may also get jammed there. The schedule of the ships coming in the next few days may also be disturbed.

According to a report by BBC Business Correspondent Theo Leggat, this may increase the cost of shipping goods to Europe.

Shipping group Marsk said, "Clearly, it will be investigated, because it has made a big impact and I think there will be some debate over what exactly happened there."

Mursk said, "What can we do so that it will never happen again?" It will be necessary for the Egyptian administration to see that the ships are always going out of the canal without any problem, because it is in their own interest.''

The eviction of the Ever Given ship is considered a big success. Some experts have previously warned that it may take weeks to get the ship out. But high waves as well as specialist equipment helped in the rescue operation.

Now the administration has to deal with another challenge - jam. The head of the Suez Canal Authority said that they would be allowed to leave the first of the hundreds of ships stuck in the jam that would come first. However, some ships may be given priority due to cargo loaded on the ship.

The impact on global trade put the administration under tremendous pressure on the jam. For Egypt, this canal is not just a question of national pride, but it also strengthens the economy.

A few days ago I asked Osama Rabi, the head of the Suez Canal Authority, whether he was worried that some shipping companies would avoid sending such large ships through the canal in the future. In response to this, he said that there is no alternative to the Suez Canal, according to him that this route reaches it quickly and is safe. So here it is not only about time, but also about security.

What will happen to the ship now?

According to the managers of the ship's technical maintenance company, the ship will now undergo a thorough investigation in Great Bitter Lake.

Managers said that no pollution or cargo damage has been detected and preliminary investigations have revealed that there was no mechanical or engine failure behind the shipwreck.

It is reported that all 25 crew members of the Indian crew on board are safe. "Their hard work and tireless professionalism are being praised," say the managers.

There are many types of things in the ship, and it is believed that this item is worth billions of dollars.