Has enmity arose between Saudi Arabia and Pakistan? 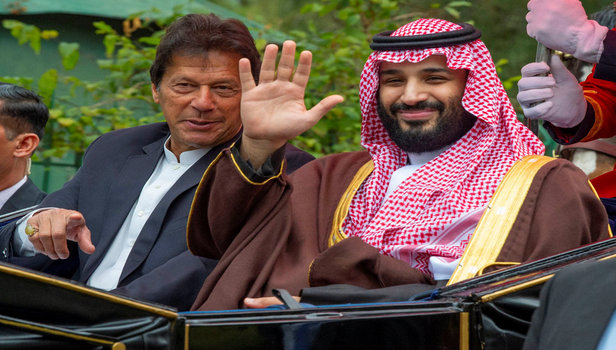 If Pakistan did not get support of Saudi Arabia on the issue of Jammu and Kashmir, then Pakistan attacked Saudi Arabia.

During a TV show, Shah Mahmood Qureshi had said, "I am once again requesting the OIC to convene a meeting of the Council of Foreign Ministers." If you do not plan it, I will be forced to call Prime Minister Imran Khan to call a meeting of those Islamic countries who are with us on the issue of Kashmir and support the oppressed Kashmiris. ''

Saudi Arabia has already described the removal of Article 370 from Kashmir as an internal matter of India.

However, in the emergency meeting of the Foreign Ministers of the OIC Contact Group in the month of June, after August 5, 2019, concern was expressed over the human rights situation and situation in Jammu and Kashmir of India.

It was also said in the meeting that the decision taken by the Government of India on Jammu and Kashmir on 5 August 2019 and new domicile rules have been implemented are the UN Security Council resolution and international law (including the fourth Including the Geneva Convention).

At the same time, India's commitment to accept the UN Security Council resolution is also violated.

After critical remarks from Pakistan, Saudi Arabia has asked him to pay a loan of one billion dollars.

Pakistan's media is also criticizing Shah Mahmood Qureshi's statement, because it has increased pressure on Pakistan to return the loan.

Experts see this as a major change in Saudi Arabia's stand on Pakistan.

On this change in Saudi Arabia's attitude towards Pakistan, Professor Sanjay Bhardwaj of the Center for South Asia Studies at JNU says, "It has to be seen as a global change." This is because of the changing equations between Asian countries. America and China are making their own different equations in Asian countries.

"Saudi Arabia has traditionally been an ally of the United States and Saudi Arabia has a dominant influence in the Islamic world." Now, when a new Cold War situation is prevailing between the US and China, China is trying to make inroads into Asian countries and is making new equations for it.

He further states, "China is going to make a big deal with Iran. Pakistan is also investing heavily in Gwadar Port and China-Pakistan Economic Corridor (CPEC). In this way both Pakistan and Iran are getting close to China, whether it is about investment or geopolitical relations. ''

"China really wants to create an alternative to Saudi Arabia in the Islamic world." For this, he is looking towards countries like Iran, Malaysia and Pakistan. A big Islamic summit has also taken place in Malaysia, in which Pakistan and Iran have strongly participated and Saudi Arabia was not present in it.

In addition, the Government of Pakistan had announced the inclusion of Saudi Arabia in the CPEC, a nearly $ 50 billion economic agreement with China in 2013, in 2018. The Imran government also faced criticism from opposition parties on this issue.

But later the government of Pakistan took a U-turn on its decision and clarified that CPEC will remain a bilateral agreement.

In the last several years, India's proximity with the Gulf countries, especially Saudi Arabia, has grown. Apart from economic relations between India, United Arab Emirates and Saudi Arabia, relations are now deepening with regard to security policy.

But is China willing to compromise its interests in the Gulf countries market because of the growing proximity to Pakistan and Iran?

Professor Sanjay Bhardwaj points out that China is certainly exploring its potential in the Gulf countries, but Iran and Pakistan are more important than Saudi Arabia as far as geopolitics is concerned. China definitely wants to pull Saudi Arabia out of the influence of the United States, but it never wants to do it at the cost of Pakistan and Iran. Apart from this, China is also trying to bring Pakistan and Bangladesh together.

Senior BBC Urdu journalist Saqlain Imam does not look at this issue only in terms of the changing equations of the US and China in Asia and does not believe that any hostile relationship has started between Saudi Arabia and Pakistan. They currently believe that there is tension between the two countries.

He sees the role of Israel and Iran in the current equations that are changing.

He says, "For the first time, there is going to be a king in Saudi Arabia who is going to stay for a long time." So in view of this change, America is planning its strategy according to the future. On the other hand, the King always needs local support as well as foreign support, because there is a danger of rebellion at local level in tribal society and hence the support of foreign power is needed. The US is currently supporting Crown Prince Mohammed bin Salman. Despite this, there remains a feeling of insecurity in the future. This is mainly because of Israel and Iran. ''

He further states, "All these countries are changing the equation of mutual relations, behind this is Israel and Iran." America and China are behind them. Of all of these, the one who is playing the most important and exportable role is Israel. This is the reason that Saudi Arabia's relationship with Israel is at its best in history after the arrival of Mohammed bin Salman. Never been so good before. But today these two countries are united against Iran. With this, Israel is getting the support of Saudi Arabia as one of the most effective Muslim country. ''

He says, "Saudi Arabia was previously identified as a Wahhabi country, not a Sunni country, but now it has been identified as a Sunni country. From this, an attempt has been made to convey that whoever is against Iran, he is a partner of Saudi Arabia. So now Saudi Arabia, India and Israel are on one side because it is with America. On the other hand, since the time of Musharraf, Pakistan is gradually becoming closer to China. Israel is playing a big role in making this equation and it is strongly against Iran. ''

By the way, tell me one thing that Wahhabis are also Sunni.

On the changing relationship between Saudi Arabia and Pakistan, the Saqlain Imam says that the Pakistani army has always been going to the security of the Kingdom of Saudi Arabia since the sixties.

This military relationship with Saudi Arabia is still in place. The only difference is that Mohammed bin Salman has become closer to the West to secure his future, but he has not evicted the Pakistan Army even today.

So, there is definitely a tension situation between these two countries, but it is not like enmity.