Does China claim Bhutan's territory to open every possible front against India? 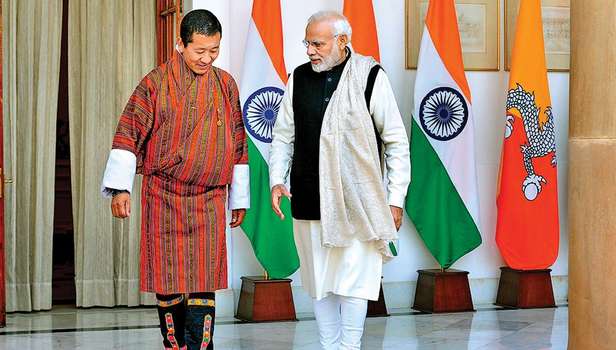 The border between Bhutan and China is not yet set and so far, the two countries have held talks 24 times to resolve the border dispute. Among these, China had never raised the issue of eastern sector.

In the border dispute with Bhutan, China views India's claim to new territories as a step against India.

At present, there are mainly two countries, one is India and the other is Bhutan, with which China has not been demarcated and has been in dispute for many years. China continues to have tensions along the Line of Control with India in which twenty Indian soldiers have recently died in a violent conflict in Ladakh.

China has a border dispute with Bhutan over the western sector and the eastern sector. Bhutan and China are being negotiated to resolve this dispute in a planned manner.

Pawan Verma said, "I think this is China's way of putting pressure on Bhutan." China knows where its boundary with Bhutan will be fixed, especially towards the west of Bhutan, where a border junction between China-Bhutan and India is formed, where there is a boundary, India Strategic interests will be affected. ''

In 2017, China and India came face to face with Bhutan's Doklam and there was a 75-day military standoff between the two countries. Even then China tried to take control of Bhutan's Doklam.

Former Indian Ambassador to Bhutan, Indra Pal Khosla said that China is currently in an expansionary mode and is making claims everywhere.

Speaking to BBC Bangla service, Indra Pal Khosla said, "In my view, China is in an expansionary mode, China has laid claim to a part of Bhutan which was not raised till now in the talks between the two countries." Bhutan and China have been negotiated 24 times on the border dispute and this area has never been discussed. China never raised the issue of this area during these years.

"Recently, Russia has claimed Russia's Vladivostok, it seems that China is now in a state when it is not paying attention to any agreement or mutual understanding or agreements in history," he said. He is now in expansionary mode. ''

Bhutan has issued a demarche to China, opposing China's claim over the Sakateng Reserve, generally Bhutan is not vocal about its border disputes and makes little comments. In such a situation, what is the reason for this political step of Bhutan?

Mihir Bhonsle, an analyst with the Observer Research Foundation or ORAF, says Bhutan is feeling scared.

Bhonsle said, "China has created a dispute in the region where Bhutan understands that it has ended the border dispute with China. Bhutan does not usually speak much on border disputes. On one side of Bhutan is China and on the other side is India.

Mihir Bhonsle believes that the objective of airing the border dispute with Bhutan may be to disturb India.

He said, "Bhutan is the only country in India's neighborhood that has always been with India, while Bhutan has no diplomatic relations with China." China feels that it can stress India by upsetting Bhutan. ''

In Doklam also we saw that China had claimed Bhutan land, after which tensions with India increased. It seems that China wants to give pain to India by twisting Bhutan's hand. ''

In 2017, when China stepped in towards Bhutan, the Indian Army came in the middle. There was 75 days of military tension between India and China in Doklam. Can the latest dispute reach that position?

Pawan Verma said, "It is possible that this dispute will reach a situation like Doklam, but it is not necessarily so." India and Bhutan have a very close relationship. Bhutan also does not have diplomatic relations with China.

Mihir Bhonsle said, "If China's border dispute with Bhutan escalates, then Doklam-like stand-off can happen again." Doklam is a tri-junction between India, China and Bhutan, apart from it Saketeng Sanctuary is very close to the Arunachal border, there may also be a tri-junction area. Tensions may further increase here in future.

Pawan Verma believes that China involved in the border dispute with India is using India's neighboring countries to pressure India. This is a well-known strategy of China.

At the same time, Mihir Bhonsle believes that China's strategic decision may be to put pressure on Bhutan. The dispute with Bhutan right now was not a big deal. Bhutan wanted to use the Global Environment Fund in Sakateng Sanctuary, which China opposed. This indicates that China is trying against India on every possible front.