Did Nirmala Sitharaman announce a concession in corporate tax because of Howdy Modi? 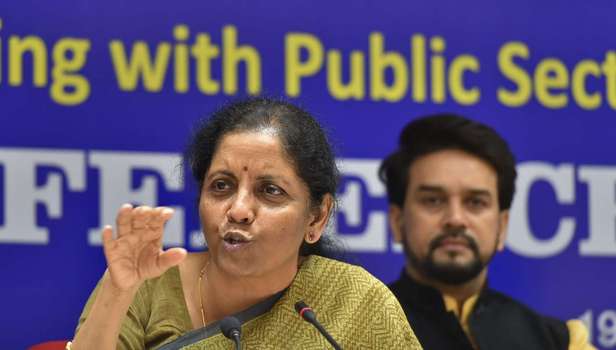 It has been reduced to 25.17%, reducing the corporate tax for domestic companies, new local manufacturing companies.

This decision has been praised by Prime Minister of India, Narendra Modi, while Congress leader Rahul Gandhi has tweeted it by linking it with Howdy Modi's program in Houston, USA.

This concession will be for domestic companies and new local manufacturing companies. After the announcement by Finance Minister Nirmala Sitharaman, the stock market saw a tremendous boom.

At one time, the Sensex has risen by 2000 points, which is the biggest one day rise in the last decade. Nifty broke the record of 10 with 550 points.

The Finance Minister said that it has been included in the new rules of income tax to encourage Make in India.

Sitharaman said that this step has been taken to maintain the flow of money in the market.

The effective rate of tax with surcharge will be 25.17%. A new provision has been added to the Income Tax Act. These provisions will be applicable from the financial year 2019-20.

India is one of the highest corporate tax paying countries in the world.

India's Prime Minister Narendra Modi has described the reduction in corporate tax as a historic step. He tweeted, "This will give a big boost to Make in India, attract private investment from all over the world, increase the competitiveness of our private sector, create more jobs and it is a win for 130 crore Indians." '

Rahul Gandhi has tweeted, "Wondering what the Prime Minister is going to do during his 'Howdy Indian Economy' gathering for stock market turmoil. Houston's program costing over 1.4 lakh crore rupees till now. The most expensive event. But no function can hide the mess in the economy that 'Howdy Modi' has created in India. '

In India, domestic companies are taxed at the rate of 30 percent, while the same tax on foreign companies is forty percent. Along with this, they have to pay four percent health and education surcharge on the entire tax.

Reuters had said in a news report in August this year that a team directly related to the tax headed by CBDT member Akhil Ranjan was considering a tax cut. The agency had said that the committee is considering increasing the tax rate from 30 percent to 25.

However, it was not confirmed by the Finance Ministry at that time.

Economic expert Ashutosh Sinha says that people need more and more cash in the economy. But the government has not cut the price of petrol / diesel. This would have reduced the cost of the products and strengthened the economy.

According to him, "Reducing the tax on fuel would increase people's savings, bring more money into their hands and increase consumption, due to which there has been an atmosphere of concern due to the decrease in the last few months. This situation can be reversed. ''

Ashutosh Sinha says, "During the crisis of 2008, the government reduced taxes on certain raw materials and products to stimulate demand. But doing so is no better option because of the huge reduction in GST and tax collection The government's revenue is under a lot of pressure. ''

Paresh Parikh, associated with global accounting company E&Y, says, "This is a big step, like the USA, UK and Singapore, this step is in line with the trend of corporate tax cuts all over the world. Apart from this, the Government of India, in India It is compatible with the policy of promotion. Earlier FDI relaxation has also been in this direction. This is the right time to make the decision because the Americans For Npanian Manufacturing are seeing out of China. ''

Ajay Bodke, CEO of PMS Prabhudas Lilladhar, says, "In order to make India a preferred destination in terms of trade and to revive the economy, the government has made several announcements that will create a new power in the declining economy. The current domestic For companies to cut corporate tax from 35 per cent to 25 per cent and enter the manufacturing sector after October 1 and 2023 The government has laid a red carpet by taxing 15 percent for new companies starting their operations before that, which will ensure FDI and FII Arbo Dollar investment in the coming 5-10 years. ''

He said, "Truly the festival of lights has come first which will end the darkness of Indian economy."

According to Gopichand P Hinduja, co-chairman of Hinduja Group, "The announcement of corporate tax cuts by the finance minister is a great step that was needed to revive the Indian economy and manufacturing sector. It shows the challenges in the economy Yes, the government is fully prepared to deal with it. I want more such steps to be taken which the government has taken first Is doing.''