Could the Beirut blast be stopped? 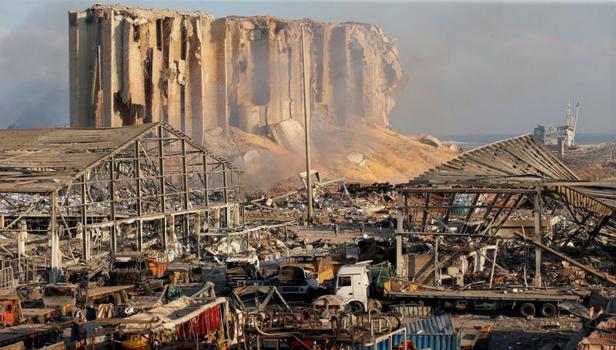 Relief workers in the Lebanese capital, Beirut, are still searching for survivors in the wrecked buildings after the blast. So far, at least 135 people have died and more than 5,000 have been injured in the blast on Tuesday.

The initial blast occurred at 6 pm local time in the Port area of ​​Beirut, the capital of Lebanon. After this there was a fire and there were other small explosions. According to some eyewitnesses, it seemed that there were firecrackers.

In a video posted on social media, smoke was seen emanating from a warehouse. But what happened after that, many people still have not recovered. Suddenly, a terrible explosion, a smog and the whole city fell under it. A fireball rose in the air. It was accompanied by a supersonic and mushroom shaped shockwave, which spread throughout the city.

Due to the terrible explosion of the second one, the buildings in the Port area were completely destroyed. At the same time terrible devastation occurred in many areas of Beirut. Beirut has a population of 2 million. Soon after the explosion, the injured started reaching the hospital and slowly filled the hospital.

George Ketani, head of the Red Cross in Lebanon, said, "What we are witnessing is a great disaster." There are casualties everywhere. ''

Beirut Governor Marvan Abood said that nearly three lakh people have been temporarily homeless. He estimated that the explosion resulted in a total loss of 10-15 billion dollars.

Experts are still trying to find out, but the shockwave that arose after the explosion and the glass broke in the passenger terminal of Beirut International Airport, nine kilometers away, is an indication of its intensity.

The sound of the blast was heard in Cyprus, 200 kilometers from Beirut. According to geologists of the Geological Survey in the US, the explosion was like a 3.3 magnitude earthquake.

Lebanese President Michel Aoun says that 2750 tonnes of ammonium nitrate was kept unsafely in a warehouse in the Port area and that the reason for the explosion is ammonium nitrate.

In 2013, a similar quantity of chemicals arrived at Port Beirut from MV Rosos, a Moldovian cargo ship. The ship encountered a technical problem on its way from Georgia to Mozambique, forcing it to stop at Beirut Port.

At that time the ship was inspected and it was barred from leaving. Its owners then abandoned the ship. This information was given by Shiparrested.com, a newsletter of this industry. The ship's cargo was shifted to a warehouse in the port for security reasons. However, it was said that either it should be disposed of or sold.

Ammonium nitrate (NH4NO3) is a crystal-like white solid, commonly used as a source of nitrogen in fertilizers for farming. It is also mixed with fuel oil to produce explosives, which are used in the mining and construction industries. The extremists have also used it many times to make bombs.

Experts say that if ammonium nitrate is stored properly, it is safe. But if this substance is kept on the same land for a long time, then it starts deteriorating slowly.

Andrea Sela, professor of chemistry at University College, London, says that the real problem is that over time it slowly soaks up the moisture and eventually turns into a big rock. Because of this it becomes very dangerous. If any kind of fire reaches there, the chemical reaction caused by it is very intense.

Ammonium nitrate is associated with many major industrial accidents. In 1947, a ship carrying 2000 tons of chemicals exploded in Texas, USA, killing 581 people.

President Aun has assured a transparent investigation into the blast.

On Wednesday, he said, "We are committed to conducting an inquiry and as soon as possible, we will bring out the circumstances surrounding this incident." Whoever is responsible for this and those who ignore it, will be punished hard. ''

Prime Minister Hasan Diab has described the circumstances behind the blast as unacceptable.

Port general manager Hassan Koretem and Lebanese customs director general Badri Daher have said that they had warned several times about the danger of storing ammonium nitrate, but were ignored.

Daher said - We asked that it be exported again, but it did not happen. We leave it to the experts and concerned to find out why this happened.

From the documents released on the internet, it seems that the Customs officials had written letters to the judiciary at least six times between 2014 and 2017, so that they can give directions in this regard.

The Lebanese government has ordered the officials monitoring the ammonium nitrate stored in the store at the port to be under house arrest until the investigation is completed.