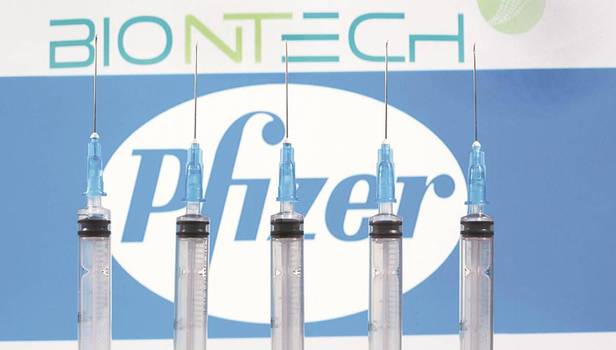 Britain has become the first country in the world that has approved the use of vaccines made by the Pfizer Company.

The British regulatory body MHRA has stated that this vaccine from Pfizer / Biontech gives 95% protection from Covid-19 and it is safe to allow its widespread use.

It is being told that within a few days, people who are most at risk will start getting vaccinated.

The UK has already placed an order for 40 million doses of this vaccine.

Each person will be given two doses of the vaccine. This means that two crore people can get the vaccine.

It is the fastest developed vaccine in the world which took 10 months to make. It usually takes up to a decade to prepare such a vaccine.

However, experts say that despite the vaccine, people should keep following the rules to prevent infection.

How does this vaccine work?

This is a new type of mRNA corona vaccine that uses small fragments of the genetic code of the corona virus collected during an epidemic. According to the company, small pieces of genetic code increase immunity within the body and prepare the body to fight against Covid-19.

Never before has the mRNA vaccine been approved for use in humans. However, during clinical trials, people have been given doses of this type of vaccine.

The mRNA vaccine is injected into the human body. It tells the immune system to make antibodies to fight the corona virus and to activate the T-cell and destroy the infected cells.

After this, when this person is infected with the corona virus, the antibodies and T-cells in his body start fighting the virus.

Who else was involved in the vaccine race?

Oxford-Astrazenica Vaccine - This is a viral vector type vaccine using genetically modified viruses. It can be stored in the refrigerator at normal temperature and has to be consumed in two doses. So far, it has been found to be 62 to 90 percent effective in clinical trials.

The dose for this vaccine will be up to $ 4.

Moderna Vaccine - This is a mRNA type corona vaccine that is being made by adding some pieces of the virus's genetic code. It will need to be stored at minus 20 degree temperature and it can be stored for six months only. It has to be taken in two doses and it has been found to be up to 95% effective in clinical trials conducted so far.

Pfizer / Biontech's Vaccine - Like Moderna's vaccine, it is also a mRNA type corona vaccine. It has been found to be up to 95 percent effective in clinical trials conducted so far. It has to be stored at a temperature of minus 70 degrees.

This vaccine will be given two doses and will cost up to $ 15 per dose.

Gamalaya's Sputnik-V vaccine - This is a viral vector type vaccine similar to the Oxford vaccine, which has been found to be up to 92% effective in clinical trials conducted so far. It can be stored in the refrigerator at normal temperature and has to be consumed in two doses.

In addition, Russia is using another vaccine named Sputnik. At the same time, the Chinese Army has approved a vaccine made by Cancino Biologics. Both these vaccines are viral vector type vaccines like the Oxford vaccine.