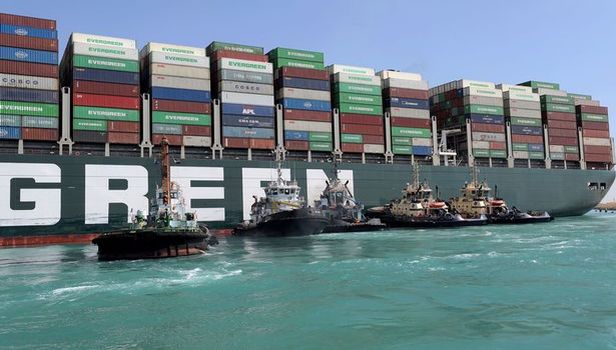 There are reports that a cargo vessel stranded in the Suez Canal has been evacuated.

The video posted on social media on Monday, March 29, 2021 can be seen that the passage of the canal is open due to the rear end of the Ever Given ship.

At the same time, news agency Reuters has written that according to InchCap Shipping Services, this huge ship stuck in the Suez Canal for about a week has now started to float again and work is going on to make it in a running condition.

Inchcap, which provides global maritime services, said on Twitter, "The ship started to float again at 4.30 am local time and is now in full operation.

The ship-tracking service vessel finder has changed the status of the ship on its website and has now written that the ship is on the way.

The 400-meter-long Avar Given ship was caught diagonally in the Suez Canal on Tuesday, 23 March 2021 amid strong winds. Because of this, there was a situation of traffic jams on this shortest ship route between Europe and Asia.

Egyptian Lath Agencies, which provide transit services in Suez, tweeted that the ship has been partially re-floated, pending official confirmation from the Suez Canal Authority.

At the same time, according to Reuters, the price of crude oil has come down after the news of the ship started to float again.

The Suez Canal Authority had earlier said in one of its statements that the work of towing the ship has been resumed. On Sunday, 28 March 2021, teams trying to evacuate had speeded up their work.

After a long effort through tugboats and dredgers, a great success has been achieved in getting the ship out.

After failing to evacuate the ship for several days, on Sunday, March 28, 2021, the Canal Administration began preparations to remove about 20,000 containers from the ship to lose weight.

Experts had previously told the BBC that special equipment had to be used in such operations, such as a crane that would have to reach up to 60 meters (200 ft), which could take weeks.