Construction of the temple in place of the mosque is a blot on the face of Indian democracy: Pakistan 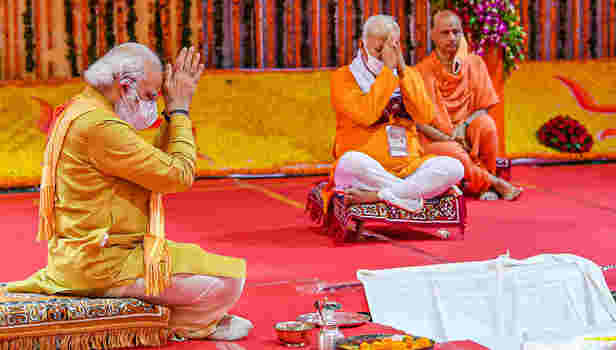 Indian Prime Minister Narendra Modi on Wednesday performed Bhoomi Pujan for the construction of Ram temple in Ayodhya and laid the foundation stone of the temple.

Pakistan has strongly criticized this step of India. Pakistan has said that the construction of the temple in place of the mosque is a blot on the face of Indian democracy.

The Pakistani Foreign Ministry has issued a statement saying, "The land on which the Babri Masjid has stood for 500 years, the construction of the Ram temple is scandalous." The Indian Supreme Court's decision to grant permission to build a temple has not only reflected the growing majorityism in present-day India, but also shows how religion is dominating justice. In today's India, the shrines of minority, especially Muslims, are constantly being targeted. The temple built on the land of the historic mosque will be like a blot on the face of so-called Indian democracy.''

Fayyaz ul Hasan Chauhan, Information Minister of Punjab province of Pakistan said, "Pakistan is taking steps like opening Kartarpur corridor, while India is taking every step that is against Muslims and other minorities and because of that its all over the world It is getting worse. The decision of the Indian Prime Minister and his party BJP has cast the face of being a secular country which is now being condemned by the whole world.

After the demolition of the Babri Masjid in India on December 6, 1992, there was also a reaction in Pakistan and many temples were damaged.

Following the Bhoomipujan program for the construction of Ram temple on August 5, 2020, security of temples and shrines of minority societies has been increased in Pakistan in the wake of the fear of any response.

The Waqf Property Board, which monitors the temples and gurudwaras in Pakistan, wrote to the Central Government of Pakistan last month and urged them to make strong arrangements to protect the religious places.

He said that his organization does not have any force of its own and it is the responsibility of the provincial governments to ensure the safety of shrines coming in their respective areas.

Aamir Ahmed said that he has also asked all the provinces to be vigilant about this.

Aamir Rana, director of Pakistan Institute for Peace Studies, however, does not agree that the Bhoomi Pujan for Ram temple in India will have any effect in Pakistan.

He said, "Though religious organizations and political parties in Pakistan will make a symbolic protest, but there is little possibility of any issue of law and order. The settlers on both sides have accepted the verdict of the Indian Supreme Court in the Babri Masjid case and now want to move forward.''

Fayyaz ul Hasan Chauhan, the information minister of Punjab province, said that the people of Pakistan are very intelligent and they cannot even think of damaging the prayers of their minority siblings on this occasion, nor can the government give any such anti-social elements like this Will allow any action.