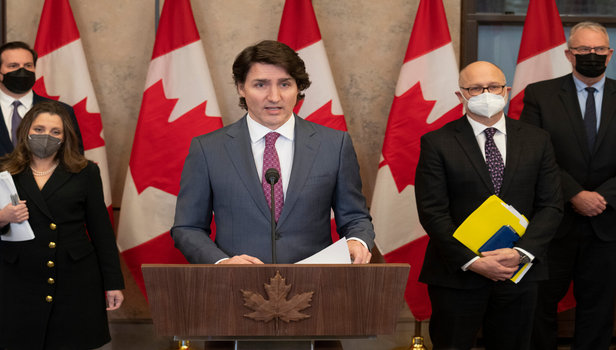 Under the Emergency Act, the government has taken this step with the aim of cutting the funds of the protesters. This is the first time in 50 years that a state of emergency has been imposed in Canada.

According to the news agency Reuters, Prime Minister Trudeau, while talking to the media, said, "Such a blockade is harming our economy and also endangering public safety. We cannot and will not allow illegal and dangerous activities to continue.''

At the same time, the Canadian Civil Liberties Association said that, "the government has not met the standard of enforcement of the Emergency Act, the purpose of the Emergency Act is to deal with threats to the 'sovereignty, security and territorial integrity'."

These demonstrations began when drivers crossing the border were ordered to be vaccinated or quarantined for COVID-19. In protest, Canadian truckers took out the "Freedom Convoy" as well as protesting against the Trudeau government's policies on everything from pandemic restrictions to carbon taxes.

Protesters blocked the Ambassador Bridge, an important trade route between Windsor, Ontario and Detroit, for six days that was cleared by police on Sunday, February 13, 2022. Protests in Ottawa have been going on for three weeks.