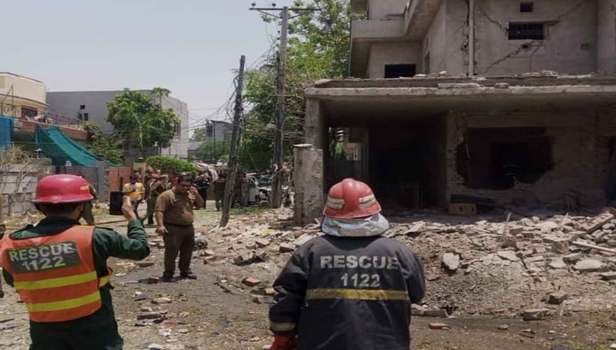 At least two people have been killed and 14 injured in a blast in Lahore's Jauhar Town in Pakistan.

Lahore Commissioner Captain R Usman has confirmed the death of two people and injuries to 14 people.

Commissioner Lahore, Captain Retired Usman Younis says that outside the house, there is a pothole in the street and there is also a car and motorbike badly damaged. Looking at the site of the blast, it does not seem that it will be a suicide attack.

Police officials say it is not yet clear whether the explosives were brought to the scene by car or on a motorbike.

Earlier, talking to Sama TV, Lahore Deputy Commissioner Mudasir Riaz had said that 12 people were injured in the blast. Children and women are also among the injured.

BBC correspondent Shumaila Jafri from Pakistan said authorities in the Pakistani province of Punjab had confirmed the death of one person. The blast took place near a residence of Hafiz Saeed, the founder of Lashkar-e-Taiba and chief of Jamaat-ud-Dawa.

An official told the BBC that Hafiz Saeed had also been using a house where the blast took place. One of the four roads leading to the same house has exploded. The police is always present at this house.

All the houses and hideouts of Hafiz Saeed are in the custody of the government and they are guarded day and night by the police.

A spokesman for Relief Rescue Team 1122 told Pakistani media that it is not yet clear whether the gas pipeline burst or the cylinder.

He said the reason for the blast was not yet clear. Lahore Deputy Commissioner Mudassir Riaz Malik has directed all rescue operations to reach the spot to help in the blast. He has alerted the emergency ward of the hospitals.

TV footage shows damage to nearby houses. The Chief Minister of Pakistan's Punjab province, Usman Bazdar, has ordered an inquiry into the blast. He said that whoever carried out this blast would be brought to justice.