Ayodhya: What did the media of neighboring countries say on Ram temple Bhoomipujan? 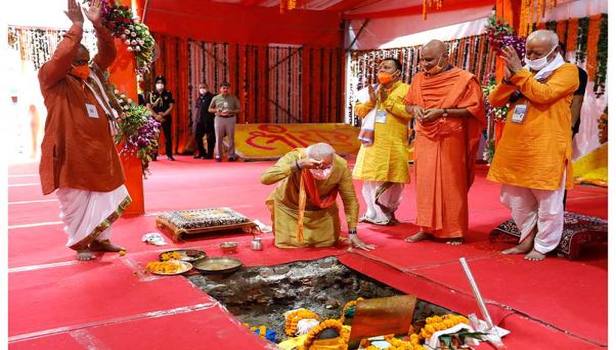 Prime Minister of India Narendra Modi on Wednesday performed Bhumi Pujan for the construction of Ram temple in Ayodhya and then laid the foundation stone of the temple.

This has been a contentious issue in India. Therefore, due to the beginning of the construction of the temple and especially by the Prime Minister himself being involved in the program, the foundation of the temple is being discussed abroad.

How does the media of India's neighboring countries see this whole development? Let's have a look at this.

A two-language website from Bangladesh, bdnews24.com, has given the news a place in the 'spotlight' and said that the temple is being built where a mosque was demolished three decades ago, following which communal riots across the country Were beginning to happen.

The report given on the front page states that "Modi and his nationalist political party have fulfilled their very old promises with this, as well as the first anniversary of their government's fulfillment of the second promise." - To end the special status of the only Muslim-majority province of India.''

The most read stories on the site include the story of Iqbal Ansari, an advocate of the Babri Masjid, and Mohammed Sharif, an Ayodhya resident, invited to attend the event. This report states that both the Muslim eyewitnesses of the 1992 riots are joining the program which is a 'sign of reconciliation' from them.

One of the biggest English newspapers in Bangladesh, the 'Daily Star', while mentioning the news in its 'World' page, has mentioned the decision of the Indian Supreme Court last year, saying, "It was a great victory for BJP though It was, but according to critics, this was another step taken to convert secular India into a Hindu nation, which is part of Modi's agenda.''

The Dhaka Tribune has a different report on Ayodhya titled - Why would a Hindu deity be shown in Times Square on Wednesday?

It has been told in the news firstly that why the issue is so controversial?

It has been said that many people are calling this whole issue a part of 'Hindu fascism' and in the wake of the protest many sponsor companies have retreated although Disney and Clear Channel are part of the outdoor program.

The second page in the international page says that although one of his ministers has got Covid-19, the Prime Minister is going to Ayodhya to attend the program.

Another English newspaper 'The Observer' has also given it a place in its international news.

Nepal's newspaper 'The Himalayan' has made headline the part of Prime Minister Narendra Modi's speech in Ayodhya on Wednesday which said - 'The wait for centuries is over'.

It has been said in the news that a lot of Muslims of Ayodhya have welcomed the construction of the temple, in the hope that after this the stigma between Hindu-Muslims will be eliminated and after that the work of economic progress will be done in the city.

But the newspaper has said that an influential Muslim organization has opposed the construction of the temple, which it has described as unfair, and repressive, shameful and enticing the majority.

The newspaper has cited the statement of All India Muslim Personal Law Board for this.

Kantipur, a Nepali-language newspaper published in many places, has said that the construction work at the Ram temple, which has been a major issue in Indian politics for decades, started on Wednesday.

Kantipur states that although the ruling Bharatiya Janata Party has been raising the construction of the Ram temple as a political issue for the last three decades, the BJP and Hinduist organizations are giving ideological and political victory to the foundation laying program.

The prestigious website 'Himal' says that the event has been held in Ayodhya but Nepal needs to be vigilant so that there is no communal riot, nor should politics and religion be integrated here like India.

In his article, well-known journalist Kanakamani Dixit has said that when religion and politics are mixed together, it creates a disintegration in the society.

Pakistan's English newspaper 'The Dawn' in its report, without naming the eminent Indian Muslims, has said that the community has succumbed to this new truth but fears that the Hindu north who belongs to its nationalist views Will target other mosques of the state.

Another English newspaper, The Daily Times, has said in the headline that Pakistan has condemned the temple being built on the site of the demolished Babri Masjid.

It has been said that with the rise of majoritarianism in India, Muslims are feeling insecure and their rights are constantly under attack.