'If BJP wins in Bengal, challenges will increase for Sheikh Hasina' 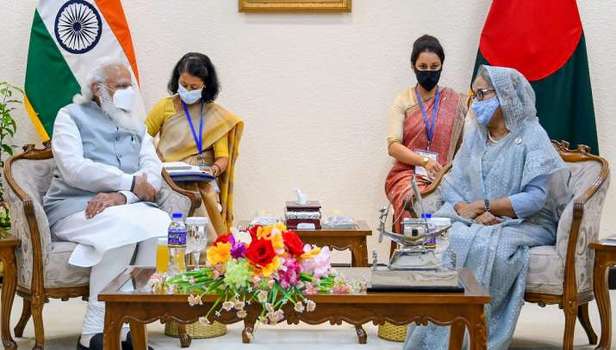 'Dhaka Tribune' has published the perspective article of Partha S. Ghosh, Senior Fellow of New Delhi-based Institute of Social Sciences. This article says that if BJP wins in West Bengal, the political challenges for Sheikh Hasina will increase manifold.

This article states that Narendra Modi's 'Hindutva' and Sheikh Hasina's 'secularism' are fundamentally opposite.

According to the article, BJP's star campaigner PM Narendra Modi for the West Bengal assembly elections starting 27 March 2021 is talking of Hindu-Muslim division, which has never been seen before in the politics of West Bengal.

It reads, "Hindutva took an entry into Bengal politics after the Modi-led BJP came to power in 2014. Recently, BJP registered a strong presence in Bengal politics and won 18 of the 42 seats in the 2019 Lok Sabha elections.''

This article states that India's neighboring country Bangladesh will have to think about the voting of the eight phases of West Bengal and then the results of May 2, 2021.

Partha S. Ghosh recalls in the article that Bengal remained a symbol of peace when other parts of India were reeling from Hindu-Muslim riots after Partition.

He writes, "There are clearly opportunities for Sheikh Hasina and Narendra Modi, but if we go in depth, serious contradictions emerge. Bangladesh is happy with India because it is benefiting financially. Its exports with India have registered 300% growth. India is also happy because Bangladesh is preventing the northeast militants from using their land but beyond these points of confluence there is a vast and dangerous sea.''

"If BJP gains power in West Bengal, the political challenges for Hasina will increase manifold." The good things of the joint statement of Hasina-Modi will be of little importance.''